Brisk business activities yet to pick up in Accra 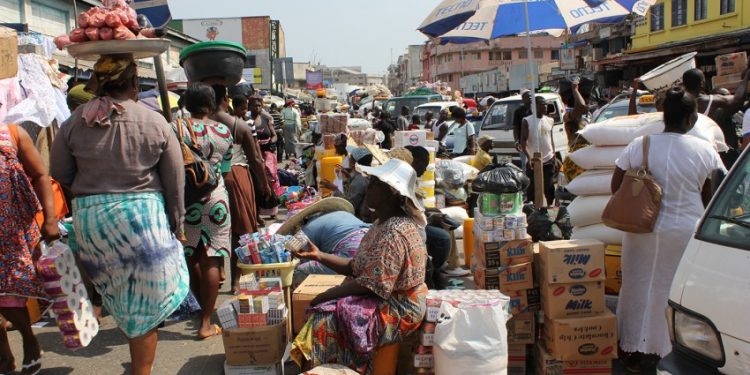 Business activities at the Central Business Districts in Accra are yet to pick up days after a break from the Christmas festivities.

The usually busy area is currently experiencing a slow takeoff in business activities.

Traders and shop owners who spoke to Citi Business News said they were expecting an increase in sales by the end of January, 2015.

Some traders said 2014 had been a difficult year because there was not an increase in sales, attributing the decline in sales to the difficult economic conditions that prevailed in the country.

Aunty Kesewaa owner of a retail and wholesale baby shop located at Okaishie said people were not buying even though they were interested in the products, however her expectation was that the cost of doing business would reduce in 2015, especially the cost of borrowing.

George Asiamah a trader at the Makola Central Market said 2014 had been a very difficult one and expressed the hope that 2015 would see a further reduction in fuel prices saying the ten percent reduction was inadequate.

He also attributed the slow nature of the pickup in business to the long holidays.

“I have high expectations for 2015 but most of the people who have been to my shop today want the product or the bag but they don’t have money.”

Citi Business News also visited an assorted drinks shop close to Central Post office at the Central Business District and Theophilus, the shop owner said business was normal indicating that the slow pace of business has always been the same at the beginning of every year but had the high expectation that business will pick up soon.

He however said government must work on the exchange rate since that also contributed to the high cost of goods on the market.
By: Norvan Acquah – Hayford/citifmonline.com/Ghana