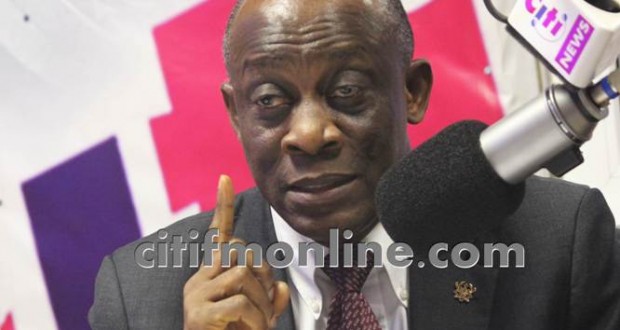 The Finance Minister Seth Terkper has revealed that his outfit will make a case for a possible review of taxes to cabinet soon.

This follows complaints by various business associations and Ghanaians that they are being overburdened by government after imposing new taxes including the 17.5% tax.

Apart from taxes on petroleum products, some Ghanaians have also expressed concerns over the re-introduction of the 17.5 percent of VAT on about 30 banking services.

The Institute of Economic Affairs (IEA) in 2014, for instance, described as unwarranted, the decision by government to slap a 17.5 percent tax on petroleum products.

However speaking on the Citi Breakfast Show, Terkper said government might make some adjustments to figures of various taxes after cabinet has completed with its deliberations.

Government has been missing its revenue targets from cocoa , gold and oil for sometime now, following changes in the prices of those commodities on the world market.

Ghana’s economy has also faced some significant economic challenges over the past two years.

The drop in the prices of these commodities have been named as one of the main reasons leading to the economic challenges.

According to Terkper, one of the factors that  have contributed to revenue shortfalls over the past few years is the decision by government to export about 83,000 barrels of crude oil instead of the initial 90,000 barrels.

“In 2012 part of the problems that we had was that in the first few years of exporting crude, we had estimated that we are going export 90,000 barrels a day we ended up exporting 83,000 a day and there was a gap that opened. So at the time we were contending with subsidy , we were contending with Single Spine arrears and the rest. Also,we were also getting a significant revenue shortfall in the budget and therefore we were spending at levels at which we were not generating sufficient revenues which led to more borrowing…”

He however stated that government will not repeat the mistake it committed in 2012.