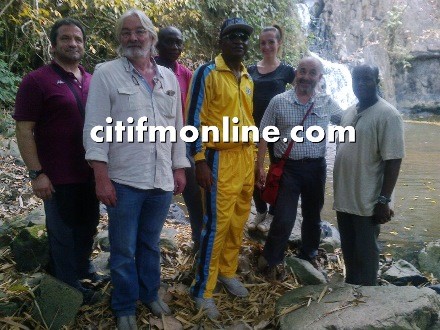 The Paramount Chief of Asogli, Togbe Afede XIV in partnership with renewable energy experts from Italy have began exploring the prospects of generating electricity from the water bodies in the Volta Region.

Togbe Afede who is also the co-founder of of the Sunon Asogli Power Plant, a power generating company said, the move is to boost the current energy capacity of the country.

According to him, as a result the growing demand of electricity in the country, there was a need to explore the renewable energy potentials by building new hydroelectric facilities at other locations.

The Volta Region he said is most likely to have the best prospects for hydro-power generation considering the number of waterfalls and other water bodies in the region.

Togbui Afede led a team of experts on renewable energy from Italy on a three-day tour to some water bodies in the region including the Wli falls, Likpe falls and the Ahamasu River.

The Paramount Chief hinted that the team at the end of the survey will come out with a preliminary report and investment requirements which would be considered for work to commence on a mini hydroelectric generation plant.

The Plant according to him, if built would not only help mitigate the power crisis in the country but would also provide jobs for the people in the locality as well harness the tourism and agriculture potentials of the region. Togbui Afede XIV was certain the project would be environmentally friendly whereas provision of potable water to the people would be well thought-out.

The Paramount Chief who has been instrumental in lessening the tension in power supply in the country spearheaded the operations of Sunu-Asogli( a private power plant which he co-founded with a Chinese counterpart Shenzhan Energy Group) in providing about 550 Mega Watts power through non-renewable energy sources such as coal and gas.

Togbui Afede however decoupled the hydropower project from the one being run by Sunu-Asogli and explained it was in partnership with the Italian experts.

AGI to hold a 3-day seminar with Power Minister