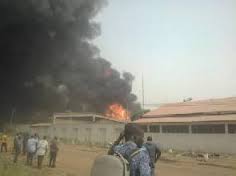 The National Insurance Commission (NIC) has ruled out any sanction against the Central Medical Stores for failing to insure its warehouse which was ravaged by fire on Wednesday, 13th January, 2015.

The Central Medical Stores which serves as the main storage facility for all medical supplies in the country was razed down completely by fire in Tema on Wednesdy.

Citi Business News has learnt the building was not insured, in contravention with the Insurance Act which stipulates that commercial buildings must not be constructed without insuring with a registered insurer.

According to the act, commercial buildings should not be constructed without insuring with a registered insurer against unforeseen hazards.

Since 1st August 2011, all commercial buildings including those under construction by law are required to have a compulsory fire insurance, a directive which was issued by the National Insurance Commission.

However reacting to the anomaly, spokesperson for the NIC, Kojo Ghunney said it will not be able to crack the whip in this matter because the building is owned by government.

He adds that ‘the commission would only have been able to prosecute, if it were to do with a private institution, even that we would have to invite the police to arrest and prosecute such organizations and individuals’’.

But the Ghana Insurers Association believes the failure of authorities to insure the building is an infringement of the insurance Act.

President of the Ghana Insurers Association Ivan Avereyire in an interview with Citi Business News said failure of authorities to insure the building will severely affect the country’s kitty.

‘’This is a national asset and they may fall on government to try to see them out of the mess, that act alone of not taking an insurance cover could infringe on the insurance law because every public property is supposed to be insured’’
According to him, there is no excuse for the officials in charge of the central medical stores not to have contacted the NIC for a policy knowing the essential value the store is to the country’s medical sector.

‘’Naturally if they had contacted the National Insurance Commission, they would have been able to arrange an insurance cover for them and I don’t know why they did not do that’ the oil and gas industry for example is insured. It is currently being insured by the Ghana Oil and Gas Insurance Pool (GOGIP)’.

When Citi Business News contacted the Ghana Health Service on the matter its Public Relations Officer, Tony Goodman said plans were underway to get the medical stores insured when the incident occurred.

‘’Efforts to get the medical stores insured was already in the offing, according to the Director of Procurement and Supply until the incident happened, but the fact still remains that it is not a facility that has been insured’’ Said Tony Goodman

He allayed fears that there will be a shortage of medical supply in the coming days.