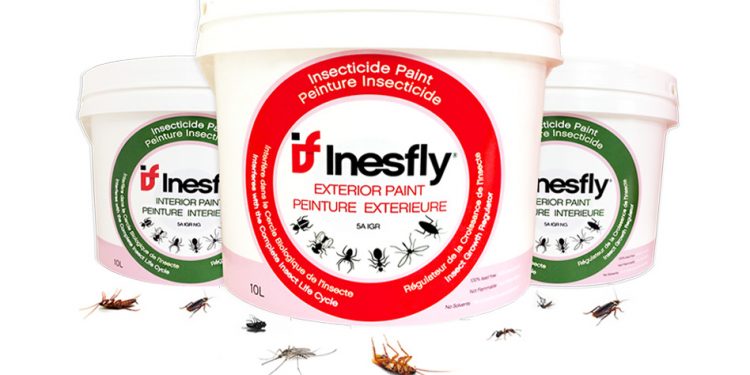 A new paint with the ability to kill insects, called inesfly has been launched in Ghana.

[contextly_sidebar id=”6bZ5InqgV7QKLJgJm4m6EHG2OMW8Ynyi”]Inesfly, manufactured and produced in Ghana, has the ability to kill insects such as mosquitoes, cockroaches amongst others.

The product was invented by a Spanish female scientist, Dr. Pilar Mateo, after 15 years of research and has been approved for use and distribution in 14 countries.

In Ghana, the paint has also gone through several tests at the Ghana Standards Authority (GSA) and the Environmental Protection Agency (EPA) and proven to be the most powerful and cost effective tool to control malaria.

Ghana spends million of cedis annually in acquiring and distributing mosquito nets to prevent malaria among pregnant women and children.

According to the Executive Director of Inesfly Africa Alejandro Pons “the Inesfly product is the first ever vaccine that has a special ingredient named the IGR which has the ability to track the full life cycle of the insect from the egg, larvae, to the adult stage and completely deal with it.
The paint is also an affordable way of preventing malaria because if you paint with Inesfly it takes a minimum of two years before you have to paint again.’’ He said.

He noted that there were separate Insesfly paints for indoors and outdoors and adds that the paint was completely harmless and safe for humans, provided one stayed away from his or her room for at least 12 to 24 hours after painting.

Inesfly is an anti vector decorative paint with a patented polymeric microcapsule technology.

Inesfly Africa does not only deal in paints but the company is into all kinds of agrochemical insecticides.
By: Norvan Acquah – Hayford/citifmonline.com/Ghana

Starbow to resume flights to Sierra Leone & Liberia in March