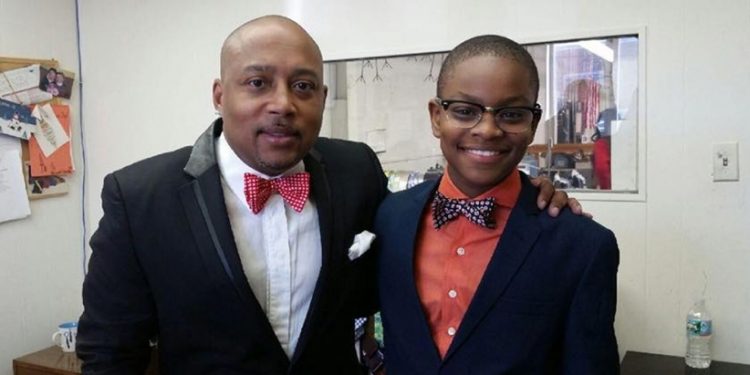 [contextly_sidebar id=”Luf5X4tjzS2mrazlctiGTLwTFacWIXnr”]Besides taking him to events and making introductions to power players in the industry, John accompanied Bridges on a morning taping of CNBC’s “Squawk Box.”

Later that day, John got a call from Karen Katz, CEO and president of the Neiman Marcus Group.

He assumed the call was for him, he tells Business Insider, but it was for Bridges.

“I’ve never been in Neiman Marcus with any of my brands, and it takes the 12-year-old child to get Neiman Marcus to call me!” John says, laughing. “So that’s the student teaching the teacher, you know?”

Today, the precocious CEO is 13. With the help of his mother Tramica Morris (“Mo is the CEO of the company, but I’m the CEO of Mo,” she says), he’s sold about $200,000 of his handmade bow ties and other men’s fashion accessories. He has seven employees — including his mom and grandmother.

John became Bridges’ mentor in 2013 after he and his mom appeared on “Shark Tank” in its fifth season. The mother-son entrepreneur duo from Memphis sought $50,000 in exchange for 20% equity in the company.

Bridges had the idea for Mo’s Bows when he was just 9 years old. His grandmother, a retired seamstress, taught him early on the importance of dressing sharp. He asked her to teach him how to sew, and soon he was making bow ties and selling them online and to several stores in the South.

By the time he taped the “Shark Tank” segment, he’d sold 2,000 bow ties he made by hand with his grandmother, bringing in $55,000 in revenue. Kevin O’Leary offered a deal for the $50,000 in exchange for a $3 royalty per tie sold, which Mark Cuban and John advised Bridges not to take.

John says that when he saw Bridges up there with Morris, a single mother, he was reminded of his own situation growing up. He told Bridges that in 1989 he declined an offer of $10,000 for 40% of his hat company; 10 years later, that hat company had grown into FUBU and was valued at $100 million.

Saying it would be a mistake for Bridges to take an investment at that point in his business, John offered to be Bridges’ mentor for free, which Bridges and Morris agreed to.

John reconnected with Bridges and Morris a few weeks later and has continued to be in touch. He says that he mentors several entrepreneurs, but that due to the unique “Shark Tank” situation, his mentorship of Bridges was the first to be formally agreed on. “I pay attention to them just as much as I pay attention to the ones I have investments in.”

Bridges tells Business Insider that John has advised him to continue to avoid investments as he builds his company, and to not grow too quickly. Rather than expand into denim, for example, John recommended that Mo’s Bows expand into neckties.

John taught him to “not think about what everybody else is doing and stay true to my brand,” Bridges says.

He also inspired the Mo’s Bows team to acquire licensing deals with companies. It secured its first one with Cole Haan late last year.

It also secured a deal with Neiman Marcus. Mo’s Bows are available on the store’s online shop and in a limited brick-and-mortar release.

“It’s playing out well,” John says. “The product is moving.”

Bridges says that his recent success has inspired his friends back home, and that John taught him that with success comes the responsibility to give to others. It’s why Bridges decided to make an annual bow tie and use 100% of the proceeds to help underprivileged kids who want to attend summer camp.

Bridges plans on following in John’s footsteps. “I want to have my own clothing line by the time I’m 20,” he says.

John is confident he’ll achieve what he sets out to accomplish, noting that when he met Bridges when he was 11 years old, Bridges had the vision and focus that John didn’t have until his early 20s. Plus, Bridges has the support of his mother and grandmother.

“I’m just adding fuel to the fire, but they can’t be stopped regardless,” John says. “I don’t want to pat myself on the back because they’re amazing.”