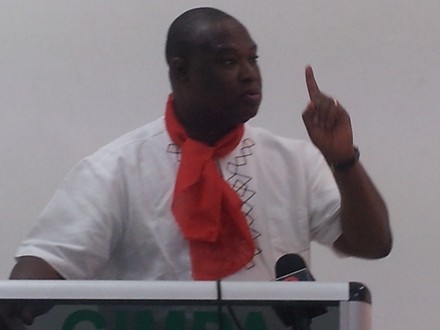 The workers of the Agricultural development bank (Adb) are calling for the immediate dissolution of the board of directors of the bank and the dismissal of the Managing Director, Stephen Kpordzih to save the financial institution from imminent collapse.

The bank which was set up in 1965 by Act 286 is one of the only two wholly publicly-owned banks in Ghana.

The Government owns 52% of the shareholding, with the remaining 48% held by the Financial Investment Trust on behalf of the Bank of Ghana.

The Securities and Exchange Commission (SEC) recently gave the bank the approval to go ahead and offer its shares to the public.

The bank is expected to offload a little over 100 million shares to the public by the end of this month with the hope to give out 75 percent of the Bank and raise about 300 million Ghana cedis.

Proceeds from the offer are expected to expand the bank’s operations.

But in an interview with Citi News the chairman of the ADB workers union Mark Imoru insists that the workers are of the considered opinion that “instead of listing on the stock market the bank should rather embark on a massive recovery exercise to rake in the 600 million Ghana cedis that we have out there in unrecovered loans.”

The workers are also asserting that “contrary to the impression being created by management over the years that the bank is doing well, our financials for 2014 indicates that the bank is fast sinking and urgent steps needs to be taken to salvage the dwindling fortunes of the bank”.

Meanwhile the Union of Industry, Commerce and Finance Workers (UNICOF) is asking the ADB staff to exercise restraint as they pursue the issue on their behalf.

In an interview with Citi News the general secretary of Unicof John Esiape also asked the management of the bank to put on hold their initial public offer until the concerns raised by the workers are addressed amicably.

“If there is no ADB there will be no staff loan, our struggle is to ensure that we keep ADB intact and viable, our ultimate objective is for ADB to continue to be the kind of Bank that it was established to be, it was strategic.”

Mr. Esiape further questioned the processes that have led to the current situation saying “it was established by an act of parliament, how that act was circumvented to get us where we are is also a subject for discussion, because our parliamentarians must answer.”

He then assured the workers of ADB that “labour will not sit down and have these assets go the way others have gone, we all know about the story of Anglogold Ashanti its nothing now.”