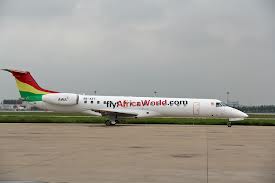 Domestic airline operators in Ghana have called on the Ministry of Transport to review the fifth freedom traffic right policy.

[contextly_sidebar id=”nmh7tfXzz8GXRS3Cv2yuMNspgqpijL48″]The fifth freedom traffic policy enables an airline to carry passengers from one country to another and from that country to a third country.

No local airline in Ghana currently has the green light from authorities to operate the fifth freedom traffic arrangement.

However foreign based airlines such as Delta, Emirates among others are under the fifth freedom traffic arrangement.

Speaking to Citi Business News Head of Commercial Sales, Revenue and Marketing for Africa World Airlines (AWA) Katherine Tosan Woode called on the Ministry of Transport to speed up with the review of the policy which will see the expansion of the local aviation industry.

“You know when you have an agreement in place but it’s not enforced and then when it’s time to enforce it is almost as if you are starting again. This is what is happening to the fifth freedom right and so we find it that is happening a bit here and there, you have Delta coming in they are not Ghanaian but they are lifting Ghanaians from here to Monrovia, Liberia and Emirates also do same on the routes with a lot of this being under the wide Yamosokroom deal, so what we feel is that the reforms must be done now.”

She believes that travel has evolved worldwide with a lot of carriers going into mergers, acquisitions and joint ventures.

Katherine Tosan Woode spoke to Citi Business News at the sidelines of AWA’s maiden flight to Takoradi on Friday 1st of May,2015.
–
By: Norvan Acquah – Hayford/citifmonline.com/Ghana