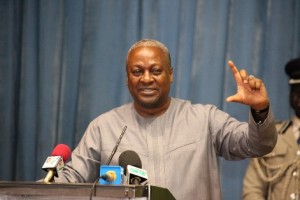 President John Mahama has announced that government has approved a consolidated security industry scheme, to ensure the legal framework that would allow Security and Exchanges Commission to regulate commodity exchanges in the country.

He said the Ministry of Trade and Industry has disbursed funding ahead of all private sector investments to begin designing the project and to ensure safety and security at the warehouses.

“The framework will propel the processes of implementation of Ghana Commodities Exchange (GCX) to give an impetus to the…economy.”

President Mahama announced this when he launched the Ghana Commodities Exchange project on the theme: “Trade with trust,” in Accra.

The GCX is a private-public partnership initiative, which is aimed at transforming agriculture through creating a state-of the art transparent and professional market institution, impacting the lives of millions of Ghana’s small producers and all others in the marketing chain.

President Mahama said the GCX will become fully operational by the middle of 2016; a situation, he said, would impact positively on farmers, retailers and processors in the agricultural sector.

He said apart from ensuring transparency, the establishment of the GCX will also promote agricultural investment with improved quality agricultural products in the markets.

The President mentioned that the project will help farmers to steadily shift from subsistence to commercial farming and would be supported to harness their potentials.

According to him, Ghana Shared Growth Agenda, investment in the fisheries among others will help step up agricultural growth in the coming years.

He said the three pillars; identification, right solution and political will, remains dominant in agricultural growth and as President, he would continue to show political will to ensure its success.

He called on traditional rulers to support all agricultural programmes to make food sufficient and a net exporter in the coming years.

Dr Ekwow Spio-Garbrah, Minister of Trade and Industry, said the project will subsequently be beneficial to all smallholder farmers as prices of their products would be streamlined.

He said Ghana though the first in the West African sub region to launch the GCX for implementation, it would learn from other countries in the continent that have over the years have introduced similar projects.

Fiifi Kwetey, Minister of Food and Agriculture, called for the strict adherence to contracts and agreements in the implementation of the programme.

“In ensuring success, respect for contracts are necessary in the execution of the project.”

The project, which is sponsored by government in collaboration with players like Sector Investor consortium and Eleni LLC as Technical Partners would be a modern market system, where buyers and sellers would come together to trade, assured of quality delivery and payment.

First in the West African Sub Region, the GCX will be a national multi-commodity exchange that would provide market integrity by guaranteeing the product grade among other things.