bycitibusinessnews
in Banking And Finance, Business, News, Top Stories
Share on FacebookShare on TwitterShare on Whatsapp

The International Monetary Fund (IMF) has begun its first review on Ghana following its approval of the extended credit facility for the country early this year.

The IMF team during the review meetings will meet with the Finance Ministry, Ghana Statistical Service, Bank of Ghana and Parliament among others.

[contextly_sidebar id=”IR7Zew0vakybNtHPMNV8ObTdP4YJREh4″]The IMF in April 2015 approved an Extended Credit Facility for Ghana worth about $918 million. 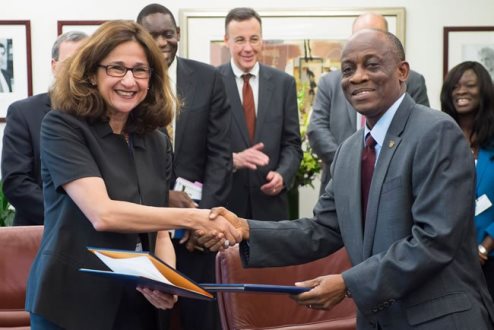 Impact of IMF cash on cedi

The cash was expected to at the time, help shore up the value of the cedi but it failed to do so.

Between that period to the first week of June 2015 the cedi continued its losing streak against major foreign currencies including the dollar, pound and euro.

[contextly_sidebar id=”CJBfbgLlZtr0yL9xi8LuGfqWsf70Xkkn”]According to the Bank of Ghana from January to May 8, 2015, the cedi cumulatively depreciated by 17.2 percent against the US dollar, compared with 21.3 percent recorded in the same period in 2014.

Citi Business News checks reveal in January 2015 at forex bureaus the cedi depreciated against the dollar by over 5 percent, in February by close to 3 percent, in March by close to 10 percent and between 1 and 2 percent for April and May this year.

Per the IMF deal Ghana is expected to embark on a number of reforms and adhere to a number of conditions.

Prominent among them are managing its debt, rationalization of the public sector payroll, removal of subsidies, strengthening the effectiveness of the Bank of Ghana’s monetary policy role and increase the country’s tax collection among others.

The IMF is expected to be heavy on these issues during the review meetings.

According to Finance Minister Seth Tekper “for those that are due thy will be reviewed but it’s not about an event in most cases it’s about progress so for example if we take payroll what progress have we made, so they will be assessing thing like that and some of them will be progressive as in what progress we have made with some of the issues,” he said.

The Executive Director of the Institute Of Fiscal Studies (IFS) Professor Newman Kusi had earlier projected that Ghana will slip at the first review of the International Monetary Fund extended credit facility.

According to Professor Kusi , Ghana cannot meet some of the conditionalities under the program.

Among other things, he said labour unions would reject efforts to cut expenditure by right-sizing the civil service which is one of the main pillars of the program.

“They must front load the fiscal consolidation, they are saying we must contain expenditure by addressing the wage bill increase. On the wage side the only advantage is by cleaning the payroll but in terms of the size we can do nothing about it”.

But speaking to economic and financial reporters this afternoon Finance Minister Seth Tekper said Ghana has made significant progress with regards to the conditions and he is hopeful it will pass its first review.

‘We have made significant progress for example with the wage bill, subsidies if you look at our first quarter report of the economy.

There have also been a lot of developments on the policy front we have moved closer to deregulating the downstream petroleum sector, we are also implementing the Ghana Revenue Authority’s modernization reform and the public financial management reform the significant development there is that the World bank has  approved the loan to continue those reforms.

So these are example of some of the things were supposed to do and they are progressive and we are doing them. So I am confident will make inroads.’

Ghana’s ailing economy pushed it to seek assistance from the IMF last year.

The Ghanaian economy has been faced with some critical ailing conditions for some time now including rising inflation, a depreciating currency, high budget deficit amongst others.

The executive board of the IMF on Friday April 3, 2015, approved a three-year arrangement under the Extended Credit Facility for Ghana in support of the country’s medium-term economic reform programme.

MTN commences investigations into use of its logo on condoms