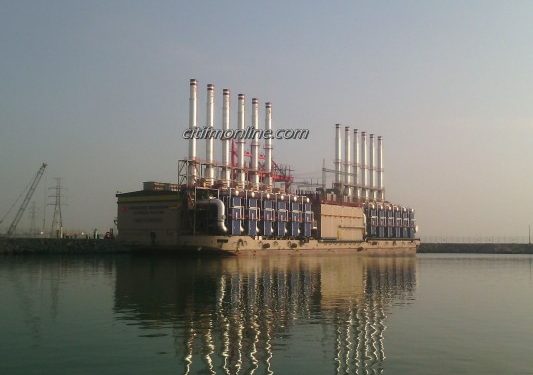 The much anticipated 225 Megawatts capacity power barge from Turkey, is finally in Ghanaian waters in the Western Region, and is being escorted to Tema.

The barge , which is being towed at a speed of 5 nautical miles, is expected to arrive at Winneba today [Friday] at 6pm.

It is expected to dock at the Tema port on Saturday afternoon.

The barge was initially scheduled to arrive in Tema on Friday morning but delays in documentation and routine formalities at the Abidjan Port where the barge was offloaded by the Black Marlin, a speed deck cargo ship which transported it from Turkey, dragged the process.

Personnel of the Western Naval Command with the vessel GNS Bilika, met the barge which entered the Ghanaian waters at 1:00am on Friday.

They are thus providing escort and security for the barge to Winneba in the Central Region, where the Eastern Naval Command will take over and escort it to its final destination in Tema.

The two barges, the second of which is expected early next year, is part of the medium term measures adopted by government to mitigate the effects of the power crisis.
–
By: Obrempong Yaw Ampofo/citifmonline.com/Ghana