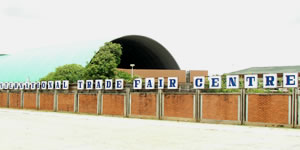 The Ghana Trade Fair Company Limited  has refuted claims it is ejecting occupants of the facility to allow a takeover by investors.

Information available to Citi Business News indicated that notices have been issued alerting shop owners at the Trade Fair centre to leave the premises by close of next week citing the takeover by a new management team.

The occupants, some of whom have been speaking to Citi Business News expressed shock at the decision insisting their rent had not expired .

But in an interview with Citi Business News, the Chief Executive Officer of the Trade Fair Company Limited, Dr. Erasmus Ebenezer Konney dismissed the allegations. Although he explained that the occupants are aware of a possible eviction, he says the decision has not yet been effected.

Dr. Konney told Citi Business News the agreement was cancelled due to the inability of the firm to fulfill some requirements. He adds a new tender is going to be opened to select a new partner for government for the revamping of the facility.

‘‘Originally everybody was informed that there is going to be redevelopment and that they will be asked to evacuate there is in the rent lease of their contracts the investor has not yet been found so we want people to clear their minds until such a time when we get an investor. Even that we will negotiate’’.