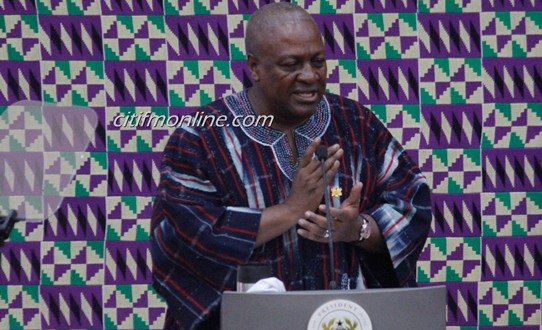 Government is moving to cut down on unprocessed gold export to add value to the commodity before they are exported.

Delivering the State of the Nation address in parliament on Thursday , President John Mahama stated that the move is part of diversifying the economy to add value to the country’s major export commodities which have seen a dip in world prices.

He maintained that the continues drop of  the country’s major export earning commodities was an indication that the economy cannot rely on exporting raw materials of its major  produce.

“The expectation is that the growing number of licensed gold buyers who have traditionally purchased raw materials in Ghana  and have exported them to other countries will seek to refine that gold in Ghana creating jobs and increase revenue”, he said.

In 2015, government had a high budget deficit of 11.5% of GDP, as well as a current account deficit of 11.7%, which were all attributed to fall in commodity prices, budget overruns and short fall in corporate income tax.

In this direction, President Mahama announced that government is funding the manufacturing sub-sector to increase revenue from exported commodities, particularly gold.

He cited for example that, the new 7 million dollar gold refinery, the Sahara Gold Refinery, commissioned at Adjiringano has the capacity to refine between 200 and 300 kilos of gold daily to meet a substantial  demand of the industry.

He added that assistant to the KNUST Jewelry School is also aimed at training core craftsmen to kick start a jewelry industry in gold mining communities.

Touching on the Ghana Export and Import Bank bill which is currently before parliament, President Mahama stated that the bill if passed will further give impetus to government’s policy of value added by supporting Small and Medium Enterprises with seed capital to improve export products.