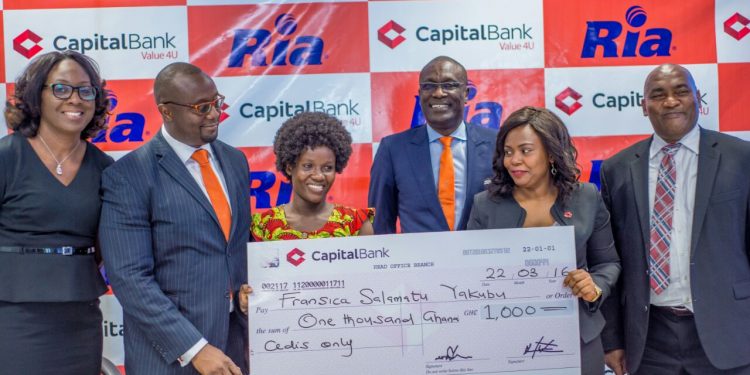 Capital Bank Ghana has entered into a strategic partnership with one of the world’s biggest money transfer operator, Ria, to boost remittances to Ghana.

The partnership will facilitate the integration of Capital Bank’s internet based systems to ensure that money transferred through Ria is received instantly across all the bank’s branches and partner outlets.

[contextly_sidebar id=”vBDCgiRDJDBzsnF6w2SU4EwlrBJQITkS”]Explaining the decision behind the partnership, the Managing Director of Capital Bank, Rev. Fitzgerald Odonkor stated that the move will expose Capital Bank’s brand to Ria’s global network of partnerships and also help the bank’s drive to become a stronger African brand with footprints across world.

He maintained that speed and precision are basic value drivers in money transfer; hence the move to integrate the bank’s systems to ensure that money transfer between Ria and Capital Bank is fluid and instant.

“We are also expanding our agency relationships to make our remittance solutions available in a total of over 50 outlets nationwide by the 3rd quarter of the year”, he said.

Mr. Odonkor stated that the partnership will also impact the lives of customers who will receive money from family and friends abroad.

“We believe remittance is about connecting families, building relationships, sharing love, helping to realize dreams and delivering hope to millions of people around the world”, he  stressed.

He added that data from the Bank of Ghana showed that since 1990, remittance has been a more relatively stable source of Investment flows than official development assistance and foreign direct investment.

Though remittances declined by 16.9 percent in 2015 due to a general global economic downturn, it is estimated to have contributed about 4.8 percent to Ghana’s GDP.

On his part, Managing Director of Ria Africa, Malick Seck assured that Ria will work to expand its network by partnering with banking and financial institutions and post offices across the country.

“Capital Bank is another good quality addition to our network.  So far, with such great innovation, we have no doubts that we have partnered with the right institution”, he said.

He commended the bank for the introduction of the “V Man” and the “Free Money 4 U” service, saying, it is a great innovation.

A unique feature of the Ria money transfer service at Capital Bank is the ability to directly credit client accounts with the remittances.

An account was opened at Capital Bank for the first Ria client, Francisca Salamatu Yakubu of Tamale.

The bank presently has 18 branches spread across six regions in the country and still counting.

(Audio) Prices of foodstuff to hit all time high