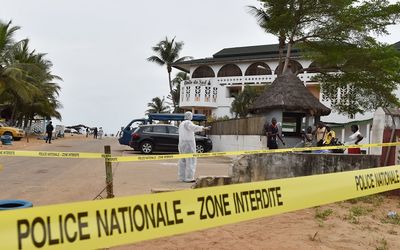 ABIDJAN — Ivory Coast’s Eurobonds fell on Monday after a terrorist attack on three hotels left 18 people dead added to the risks of investing in the world’s biggest cocoa producer.

The government had previously said six assailants were slain. Al-Qaeda in the Maghreb and al-Mourabitoune claimed responsibility for the attack in a statement to al-Akhbar, a Mauritanian newspaper.

Ivory Coast, the world’s biggest producer of cocoa, has been on high alert since November, when al-Qaeda-linked insurgents stormed a luxury hotel in Mali and seized hostages. That assault left 22 people dead. The militants pledged to continue targeting French interests and carried out a similar raid in neighbouring Burkina Faso in January that left 30 dead, many of them foreigners.

Yields on $750m of securities due July 2024 jumped as much as 12 basis points before trading 6 points higher at 7.16% by midday in London. That compares with a 1 point increase to 8.19% for Eurobonds of Nigeria, which shares Ivory Coast’s B+ rating at Standard & Poor’s.

Its economy has rebounded under President Alassane Ouattara after almost a decade of conflict in the 2000s and a disputed election in 2010 that left thousands dead and forced the country to default on its foreign debt.

Last year, the economy’s expansion was estimated at 8.6%, more than twice the average in sub-Saharan Africa, according to the International Monetary Fund. The government is forecasting growth of at least 9% this year.

A $1bn sale of 12-year sinkable bonds in February 2015 attracted $4bn of offers, according to the finance ministry. The nation has $4bn of foreign debt outstanding, according to data compiled by Bloomberg.

“This is one of the furthest reaches of al-Qaeda in the Islamic Maghreb that we’ve seen,” Cailin Birch, a political analyst at the Economist Intelligence Group, said by phone. “For the moment the violence has really focused on French-speaking countries with a proximity to Mali, which allows for an easier cross-border flow of small groups of fighters.”

Islamist fighters have established bases in northern Mali since a coup left a temporary power vacuum in 2012. When they threatened to overrun the capital, Bamako, French President Francois Hollande sent thousands of soldiers to push back the insurgents, who benefited from weapons looted from Libyan stockpiles after the ouster of Muammar Gaddafi the previous year.