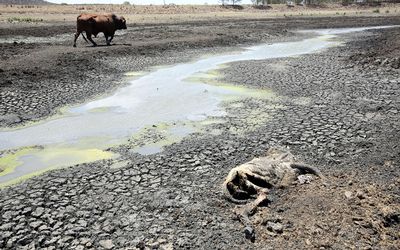 HARARE — The number of Zimbabweans requiring food aid has risen to four million, up from three million initially, a state-owned newspaper said on Tuesday, as the country grapples with its worst drought in more than two decades.

An El Nino-induced drought has hit Zimbabwe hard and last month it appealed for $1.6bn in aid to help pay for grain and other food.

“Indications are that the figure of vulnerable households requiring food assistance could be as high as four-million people,” public service, labour and social welfare minister Prisca Mupfumira told the Herald newspaper.

Ms Mupfumira was not immediately available for further comment.

She said government stocks of maize, the staple food, were 91,326 tonnes as of March 10 — enough to last three months.

Ms Mupfumira did not give details of stocks held by private millers and farmers.

The government has issued licences to private millers to import grain while organisations such as the United Nations’ World Food Programme are feeding 1-million people.

The drought and low mineral commodity prices are taking their toll on the economy, with finance minister Patrick Chinamasa saying last week it was “under siege”.

Farmers have already lost cattle and crops and fear more pain as the year progresses.

The El Nino weather pattern has also brought poor rains to other countries in the region, including SA, its biggest maize grower.

Angola’s crude output tied up to pay for big loans