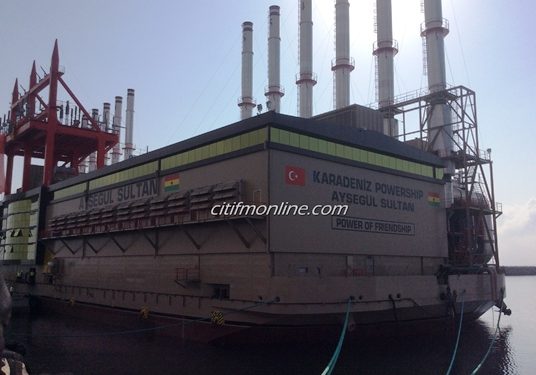 Karpower Company limited has defended its contract with the Ghana National Petroleum Corporation (GNPC) to supply fuel for the Karpower emergency power ships.

According to Karpower, GNPC got the contract on merit after a rigorous selecting process.

[contextly_sidebar id=”Mlb4KML6v2TluQlDl1nh6MjS8FYZYfcJ”]Questions have been raised over GNPC’s involvement in the supply of fuel to Karpower Company Limited.

Karpower, prior to the coming of the power ship to Ghana in November 2015, had given indications the company was going to be responsible for procuring its own fuel to power the barge.

The 225 megawatt Karpowership consumes approximately 35,000 tonnes of Heavy Fuel Oil (HFO) per month, which translates into close to 9 million USD.

But Executive Director, in charge of Business Development at the Karpower Company limited, Zeynep Harezi in an interview with Citi Business News said the fuel responsibility still rests on Karpower, insisting that GNPC provided the best terms meeting all specifications during a competitive bidding.

“We choose the best company that is providing the lowest tariff and the best delivery terms and because GNPC is the national petroleum company, they were able to provide us with those terms at a more competitive commercial terms than the rest of the fuel companies. We had discussions with the companies providing our terms and specifications with the deliverables which GNPC met as we counted on their good relationship with the Electricity Company of Ghana (ECG),” she said.

Zeynep Harezi added, “The fuel supply responsibility is still on us so if GNPC did something wrong, ECG would not go to GNPC but rather will hold Karpower responsible for providing electricity.

Nigerian parliament probes whether MTN fine can be reduced