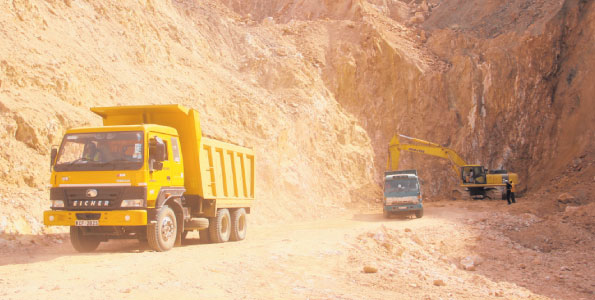 The local mining sector’s attractiveness has slightly improved, according to the latest survey by Canadian think-tank Fraser Institute.
The Fraser Institute 2015 survey has ranked Kenya 103 out of 109 jurisdictions that were covered. It was ranked 121 out of 122 in the 2014 report due to insecurity and ‘poor’ mining policies.

‘Poor’ policies especially the proposed mining laws and the State warning that it would revoke licenses of laggard miners are seen as the biggest concern for players surveyed in the latest report.

“Unilateral cancellation of exploration licences, plus threats to exploration companies that no further exploration licences will be issued and that mining licences must be applied for, despite the resource not yet being defined, are all issues,” the survey quoted a manager at a Kenyan producer with more than $50 million (Sh5 billion) in exploration spending as saying.

Mr Balala at the time said going forward the ministry would require companies to carry out a specific amount of work per year or have their licences revoked, which is similar to requirements in the oil and gas industry.

Some of the firms affected have since gone to court. Cortec Mining Kenya, whose permit was revoked, has gone to both the local and global courts to affirm its rights.

“The new Mining Act has many issues. That the government is taking 10 per cent of equity is a major issue, as is the insistence on 30 per cent local ownership and listing on the local stock exchange,” reads the latest report.

The survey, which was carried out between September and November 2015, did not name the respondents so as to maintain confidentiality.

The top 10 best jurisdictions were Western Australia, Saskatchewan, Nevada, Ireland Finland, Alaska, Northern Territory, Quebec, Utah, and South Australia. Another study found that the industry has potential to generate Sh255 billion annually for the next 25 years.