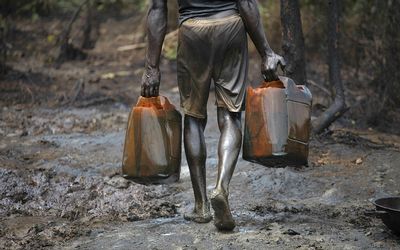 NIGERIA’s state oil company has not reported annual financial data on its profits, losses or spending for a decade. But eight months after the election of President Muhammadu Buhari, the Nigerian National Petroleum Corporation (NNPC), which oversees production of 1-million barrels of oil a day, has promised to come clean.

On its official Twitter feed, the NNPC has begun posting monthly updates of its financials and last month, published a 38-page report covering its activities last year— in the first annual statement since 2005.

It is a big step for an entity that is notorious for mismanagement and inefficiency, not to mention suspected outright theft of the oil wealth of Africa’s biggest producer of crude.

The NNPC says the effort to produce and publish financial reports online began shortly after the president appointed Ibe Kachikwu, a former ExxonMobil executive, to lead an entity responsible for managing the country’s largest revenue stream.

“Before, nobody could even see what our books were like, whether we were operating at a loss or … at a profit,” says the organisation’s spokesman, Ohi Alegbe. “It’s a new NNPC. We want to be as transparent as possible.”

Questions about the NNPC’s business practices had raged for years. The scale of alleged losses of state oil revenue through mismanagement and fraud under the administration of former President Goodluck Jonathan was exposed by former central bank governor Lamido Sanusi, who said he had proof that Nigeria was losing as much as $1bn a month — at a time when oil production was down only marginally and world prices were steady.

A subsequent audit by PwC, the professional services firm, found that billions of dollars were unaccounted for in the company’s 2012 and 2013 accounts, adding credence to the suggestion that the NNPC was diverting revenues from state coffers.

The 2015 unaudited accounts are not much prettier. The new management, appointed only in August, has not yet been able to stop the haemorrhaging, especially now that oil is very cheap.

The figures show a loss of 267-billion naira, or $1.3bn, in 2015, stemming largely from the refining division.

Last year, three out of the four state-owned refineries were closed for seven months because of maintenance and vandalism.

For all the report’s professed transparency, experts say there are gaps that conceal vital revenue streams. Alegbe acknowledged the report was a work in progress.

Of particular concern is the opacity around oil and fuel sales, which are worth billions of dollars a year and are Nigeria’s main source of income. Nigeria is dependent on oil for about two-thirds of state revenues and is among the countries worst affected by the plunge in international crude prices to less than $30 a barrel in January.

The NNPC’s practice of withholding money from domestic crude sales that should be paid into federal coffers had in recent years “been the largest single point of public revenue loss”, according to Aaron Sayne, co-author of a Natural Resource Governance Institute report last year. It estimated there were shortfalls of $6bn a year between 2010 and 2013.

A chart in NNPC’s 2015 report shows the total sales value to November at 1.67-trillion naira, but lists the payments the NNPC remitted to the treasury at 987.5-billion naira, a shortfall of 689.2-billion naira.

Industry executives say, however, it is unrealistic to expect one-for-one equivalence between the barrel entitlement of the government and the amount it receives in dollars from the NNPC, which has joint ventures with domestic and foreign oil companies.

Mr Alegbe says that, by law, the company is also allowed to hold on to revenue to cover operating and production costs. This could vary to take into account discretionary amounts associated with refinery breakdowns or attacks on pipelines. There are no clear rules governing how much revenue the NNPC can withhold.

For years, “the NNPC has had nearly unfettered discretion over its own spending”, Sayne says. The way the NNPC remits revenues to the government should change considerably after the passage of an oil reform bill that is currently being drafted, says senate president Bukola Saraki.

The “Nigerian oil company … will run like a limited liability company with a board and make its returns to shareholders, of which one is the government”, he says. “No one will be going and reaching and taking from the company.”

The NNPC’s nod to transparency comes amid other initiatives to overhaul the oil sector. Kachikwu has, for example, cancelled opaque “swap” deals through which crude cargoes were exchanged for refined imports without money changing hands.

Efforts are also under way to get decrepit refineries working and to end the costly practice of shipping crude from fields to refineries instead of pumping it through secured pipelines.