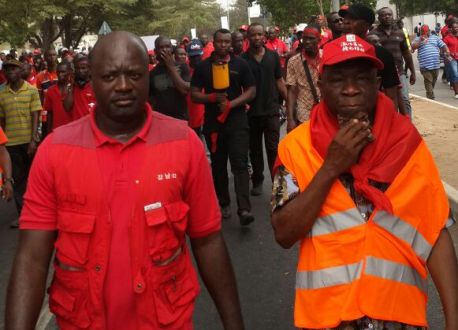 The Ghana Transport, Petroleum and Chemical Workers Union is threatening a nationwide strike if government fails to sanction Multinational companies that flout the country’s labour laws.

[contextly_sidebar id=”7XKdOXAbymGZ4H6XJAFfRgTBACknB5fg”]The Union is accusing the expatriates of unfair treatment particularly regarding salaries and other conditions of work.

The issue of unfair treatment and wage disparity between Ghanaian workers and their foreign counterparts has been at the forefront for some time now which the workers believe requires utmost attention.

Nineteen sacked Ghanaian workers of MODEC are currently challenging their expulsion in court.

President of the Ghana Transport, Petroleum and Chemical Workers Union, Bernard Owusu, tells Citi Business News they will insist till their welfare is protected.

“For instance, an engineer who is a Ghanaian is paid 2000 cedis and the multinationals are paid between 6000 and 7000 cedis. So we are asking government to listen to what we are saying because we will not allow multinationals to come to Ghana and disregard our labour rules. This shouldn’t be the case but that is what we are facing now,” Bernard Owusu stated.

He added, “We will use all the legal means even if we have to go on a nationwide strike, we would resort to that.”