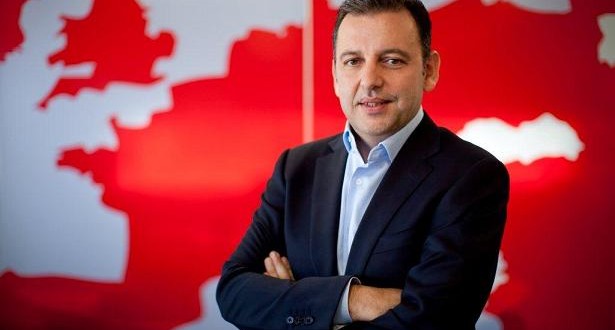 Vodafone Ghana’s CEO Haris Broumidis is leaving Ghana to take over the company’s operations in Greece, the company has said in a statement.

Mr. Broumidis is leaving Ghana after being in charge as CEO of Vodafone for three years.

He is quite familiar with the Greek terrain where he was formerly the Marketing Director and EBU Director at Vodafone Greece.

He replaced Kyle Whitehill, who industry players said did a great job with the company before leaving to head Vodafone’s operations in Qatar.

Haris Broumidis’ time at Vodafone Ghana coincided with a very competitive telecommunications market and was instrumental in leading the business to achieve high levels of growth.

He also launched a number of transformational initiatives, including the popular Vodafone X and the mobile money platform, Vodafone Cash.

Board Chairman of Vodafone Ghana, Dr. Kobina Quansah said; “It is sad to see Haris go after presiding over a very fruitful period for the company. However, we are determined to ensure that the successful growth story established under his leadership is maintained and the company continues to thrive.”

Haris also championed a number of IT and Network transformation projects including the introduction of a new Billing System and numerous initiatives focused on driving network leadership.

He is credited for driving a strong people agenda, increasing Employee Net Promoter Score from 49% to 78% over the period, while advocating and improving the ratio of internal senior promotions.

After joining the company, he held various senior roles including Marketing Director and EBU Director in Vodafone Greece, CEO of Vodafone Albania and Commercial Director, Europe for Vodafone Group.

Vodafone Ghana in the statement said it will announce Haris’ replacement “in due course.” Haris will, however, remain with Vodafone Ghana until the end of the financial year and ensure a smooth transition to the new CEO.

He joined the group in 2002 and held various senior positions including Marketing Director and EBU Director in Vodafone Greece, CEO of Vodafone Albania and Commercial Director, Europe for Vodafone Group.

Anglogold completes move to handover 60% of  mine to govt