Zimbabwe: U.S$15 Billion Diamonds Looting – Was Mugabe in a Coma? 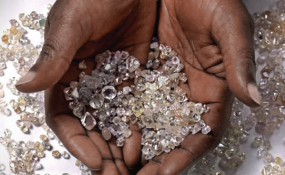 PRESIDENT Robert Mugabe’s remarks that more than US$15 billion worth of diamonds were produced but little accounted for is the clearest indication yet that he is now a national liability beyond measure and his continued stay in office is of great harm to the country’s interests and prospects of economic recovery.

For him to say this during his 92nd birthday interview, after repeated warnings by former finance minister Tendai Biti that diamonds were being looted since 2008, is a grave insult to Zimbabweans’ collective intelligence.

What makes it worse is that the staggering amount — which is just as good as the country’s GDP — could have been used to wipe clean the country’s US$10,8 billion debt and improve the livelihoods of citizens ravaged by company closures and job losses.

Whether it is selfishness or growing senility on his part, it is clear Mugabe’s continued stay in office will continue to bring poverty, hunger and misery to the nation.

Mugabe gives the impression of a man who has been in a coma since 2008 when the Chiadzwa diamond rush started and has only awakened to find that diamonds are missing. That the country remains a basket case when it has diamonds of such value is a damning indictment of Mugabe’s disastrous rule which has been characterised by ruinous policies and cancerous levels of corruption.

As usual, we are not holding our breath that Mugabe will act against both the perpetrators and those who were mandated to supervise operations in Chiadzwa.

A report in a local weekly that the Harare City Council has spent about US$100 000 on rental cars even as it sits on a five-month salary backlog for its impoverished workers, makes disturbing reading.

At the centre of the storm is finance director Justin Mandizha — an uncle of the mayor Bernard Manyenyeni — whom councillors accuse of unilaterally suspending a January tender to buy 20 vehicles, the report further reveals.

This comes at a time the capital city has become an eyesore with many suburbs becoming breeding places of diseases such as typhoid due to sanitation problems, lack of water and garbage all over the place. Indeed, it is a far cry from the Sunshine City the council always harps on about.

The misplaced priorities by the council, risible as it is, have become part of a national cancer. They have clearly shown that they have taken their lessons well from Mugabe who blew close to a million US dollars celebrating — North Korean-style — his 92nd birthday as three million Zimbabweans face starvation.

He could not even share his birthday cake with hungry villagers in Masvingo!

Mugabe’s spokesman George Charamba is a nice guy, but can be very comical at times. Consider his outbursts during a recent interview with ZiFM; to the uninitiated and naïve, including his gullible state-run daily Herald hacks, his remarks and acts of bravado — not to mention the “tomfoolery” (his word not Muckraker’s) — were treated like God’s judgment on his colleagues, marking the end of their careers.

The state-controlled weekly Sunday Mail also bought into his lights-out and delusional interview, telling us there will be some gnashing of teeth and weeping soon, ostensibly among G40 warriors fighting the Crocodile Gang.

“The President is not a character who rushes. He will allow you a very long rope, you go about enjoying meaningless headlines and thinking you are on top of the world, it will take just one afternoon,” Charamba screamed.

“So watch it, there are many sinister minds that speak in the name of the President, who are in fact ‘successionists’ and it won’t be long before the headlines give you the story.”

Muckraker has been watching closely, but all he is seeing now are ruthless purges of Charamba’s allies within the Crocodile Gang! What does that make of Charamba and his interview, as well as his Zimpapers puppets? Was Charamba speaking as Mugabe’s spokesman as he claimed?

Muckraker is not upset that Charamba obviously lied to Zimbabweans, but happy that from now onwards we can’t believe him anymore. He has exposed himself big time. Irony writ large.

‘Of late, we have noted the party president and first secretary Cde Robert Mugabe seems to have intended to privatise Zanu PF.

“It has now become a crime in the party to criticise wrongs and you will be accused of undermining the First Family despite the fact that there is no such constitutional provision, which talk of the first or last families, as the party is about individuals as members coming together under the banner of the organisation.”

The quote above is not by MDC-T spokesperson Obert Gutu or MDC spokesman Kurauone Chiwhayi. Certainly not from Tendai Biti. It is from an expelled Zanu PF youth leader Vengai Musengi who, after being booted out, has suddenly began to see what most people have been saying all along.

These were the same youths who used to deify Mugabe calling him the only centre of power and worshipped the ground he walked on when they benefitted from his largesse.

“Cde party president, can it be true that all others whom you were with in the trenches during the liberation struggle, the likes of Margaret Dongo, Dumiso Dabengwa, Joice Mujuru, Simba Makoni and even the late Edgar Tekere, have rebelled against the cause of the masses, the party and the revolution and have all strayed from the correct path of the revolution and that only you have never strayed and remain ideologically correct? How has this been so?,” the disgruntled youths wailed.

It is a powerful statement which is unfortunately coming from a hypocritical source. We doubt that they would have uttered anything close to this had they continued to be beneficiaries of the gravy train. It is an obvious case of sour grapes.

We leave the last word on this sudden turnabout by the dumped youths to a bemused reader.

Gwinji told the Parliamentary Portfolio Committee on Gender and Women Affairs that if anything the traditional methods proposed by Mudede might result in high cases of pregnancy.

“Contraceptives are safe and reliable and do not cause any defects or infertility, and I would really like to allay misconceptions thrown around in the media and say they are not true,” he said.

Mudede should stick to his duties as Registrar-General and not wade into territory that he has clearly very little understanding of. The assertion by Mudede not only encourages unwanted pregnancies, but sexually transmitted diseases as well.

Mudede should be chided for making statements which are not only irresponsible, but also plain daft. He should concentrate his focus on cleaning up the voters’ roll which is full of dead people registered as voters instead of advertising his ignorance and primitive ideas.