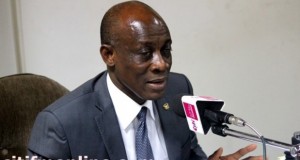 Ghana accepted 1.123 billion cedis (294 millon dollars) for a three-year domestic bond with a yield of 24.5 percent.

Proceeds of the bond, which was open to offshore investors, will be used to finance the government’s 2016 budget.

It was sold through a book-builder’s system arranged by Barclays Bank, Stanbic and Strategic African Securities.

Total bids received amounted to 1.13 billion cedis with 71 percent of that coming from offshore investors.

Ghana paid 24.75 percent yield on a three-year bond arranged by book-builders in January, this year.

Ghana’s total public debt is around 70 percent of GDP, while consumer inflation stood at 19.2 percent in March, up from 18.5 percent the month before.

According to him, even though the move may crowd out the private sector from accessing funds, it may also offer some comfort for banks that are trying to cut down lending to the private sector due to increased risks as a result of the economic conditions and the recent power crisis.

Touching on the implications on the public debt, Professor Bokpin stated that  currently, government has no other option than to resort to the domestic market to raise funds for infrastructure development.

He pointed out that,  any attempt by government to increase taxes now may not appear economically prudent since the ordinary Ghanaian is already burdened with imposition of tax.

So far, government  has raised  about GH¢10.62 billion cedis through various debt securities and going by the Bank of Ghana’s notice served of government’s plan, the total value of issued securities this year will reach GH¢15.5 billion by the end of the April.

The government has announced that the Cylinder Recirculation Policy is set to kick off in parts of the country by...