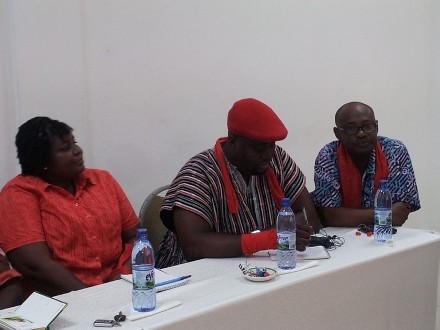 A Vice Chairman of the Tema region of the Union of Industry, Commerce and Finance Workers (UNICOF) Isaac Bondorin, has hurled the union before the National Labour Commission (NLC) over what he describes as wrongful application of the union’s constitution over the suspension of its General Secretary.

According to Isaac Bondorin, the actions taken against the General Secretary are unlawful and likely to result in judgment debts.

Mr. Bondorin also fears the matter if unresolved, could further lead to the collapse of the Union.

UNICOF in May this year suspended its General Secretary, John Esiape over alleged malfeasance.

The suspension which took effect on May 13 also demanded that Mr. Esiape returned all assets of UNICOF in his possession by close of work Tuesday May 17, 2016.

But commenting on the development to Citi Business News, Isaac Bondorin said his action was motivated by his quest to ensure the proper implementation of the constitutional procedures.

“I have a duty to protect the constitution of UNICOF and that has motivated me…I cannot allow the constitution of the union to be handled any how or manipulated for the advantage of certain people that is why I’m taking this action. It looks like some kind of kangaroo committee that has been formed to get the General Secretary out of office. As a member of UNICOF I’m duty bound to protect the interest of UNICOF and that is exactly what am doing,” he observed.

At the time, persons with knowledge on the matter told Citi Business News John Esiape’s interdiction, follows the alteration of a document by UNICOF’s accountant, who during investigations reveled he was given the go ahead to make the amendments by the General Secretary.

John Esiape has since threatened legal action against the union over his suspension.

According to him, the Management committee of the Union has no power to suspend him per the rules of UNICOF.

A letter from John Esiape to the Chairman of UNICOF, Alex Nyarko – Opoku, cited by Citi Business News stated “It is instructive to note that by the UNICOF constitution, the Council (National Executive Council) may suspend a National Officer on proven grounds of gross misconduct by the votes of not less than 80% of its membership.”

John Esiape who described the interdiction and suspension letters from UNICOF and signed by its chairman Alex Nyarko – Opoku as slanderous also asked that the chairman acts with dispatch to rectify the situation or risk being sued.