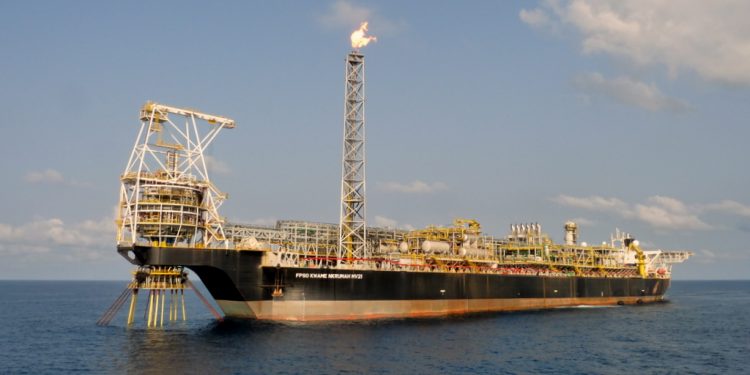 The Jubilee partners will spend at least three hundred and forty five million dollars to fix the faulty turret on the Kwame Nkrumah Floating Production Storage and Offloading (FPSO) vessel.

Lead operator of the Jubilee field, Tullow was forced to shut down the vessel early this year and subsequently cut down production from the Jubilee field, after resuming operations this year, because of the faulty turret bearing on the FPSO Kwame Nkrumah.

Tullow Oil, earlier told Citi Business News it had cut production output from the field by over 50 percent to 33,000 barrels of crude oil per day as against the 100,000 per day it was producing prior to the shut down.

Tullow however in a trading Statement and Operational Update released today [ Thursday] said it expects average gross production at the jubilee field to be around 85,000 barrels of oil per day in the second half of 2016 following a number of new procedures it is currently rolling out to fix the turret issue.

It has  however revised its production guidance range to 62-68,000 barrels of oil per day.

‘In the first half of 2016, Tullow’s West Africa working interest oil production averaged 51,900 bopd. This is below previous guidance due to lower production from the Jubilee field in Ghana, following issues with the FPSO turret identified in February. This resulted in an extended shut down period in April while new offtake procedures were implemented to enable the Jubilee field to restart in early May. Production has gradually been ramped up since then, with gross production in June averaging around 90,000 bopd. As a result, Jubilee gross average production in the second half of 2016 is expected to be around 85,000 bopd (net: 30,200 bopd). Tullow therefore expects average gross production for the Jubilee field in 2016 to be around 74,000 bopd. As a consequence, Tullow’s West Africa oil production guidance range is revised to 62-68,000 bopd net’.

Tullow believes the first two phases to be rolled out to fix the turret will cost between $100-150 million but those phases will be subject to government approval.

‘The Partners are working with the Government of Ghana to seek their approval for this option. The first phase of this work will involve the installation of a stern anchoring system to replace the three heading control tugs currently in the field. This is anticipated to be completed by the end of 2016 and will require short periods of reduced production. Tullow then plans a second phase of work to rotate the FPSO to its optimal spread moor heading in the first half of 2017’.

There will also be additional gross operating expenditure of the revised procedures which are currently expected to be around $115 million for 2016 and $80 million for 2017.

‘Upon completion of the spread mooring work programme in mid-2017, the Partners will review opportunities to improve the efficiency of offtake procedures, which may include the use of a larger dynamically positioned shuttle tanker, and seek to return production to levels seen before the turret issue occurred. The additional gross operating expenditure of the revised procedures is currently expected to be around $115 million for 2016 and $80 million for 2017’.

The lead operator adds that the Jubilee FPSO will have to be shut-down for 8-12 weeks during the first half of 2017 as part of moves to fully fix the turret.

‘The work programme covering these phases, which requires Government approval, is expected to cost $100-150 million gross and it is estimated that the Jubilee FPSO will need to be shut-down for 8-12 weeks during the first half of 2017’.

Tullow adds that ‘a deep water offloading buoy is anticipated to be installed in the first half of 2018. This will remove the need for the dynamically positioned shuttle and storage tankers and the associated operating costs. Market enquiries are currently ongoing to estimate the cost and schedule for the fabrication and installation of this buoy’.

Faulty turret cost to be covered by insurance

But Tullow assures the cost in relation to the turret will be covered under its insurance policy.

‘Tullow has a comprehensive package of insurances in place. This includes Hull and Machinery insurance, procured on behalf of the Joint Venture, which covers relevant operating and capital costs associated with damage to the FPSO, and Business Interruption insurance for Tullow which covers consequent loss of production and revenue. Claims under both policies have been notified to our insurers’.