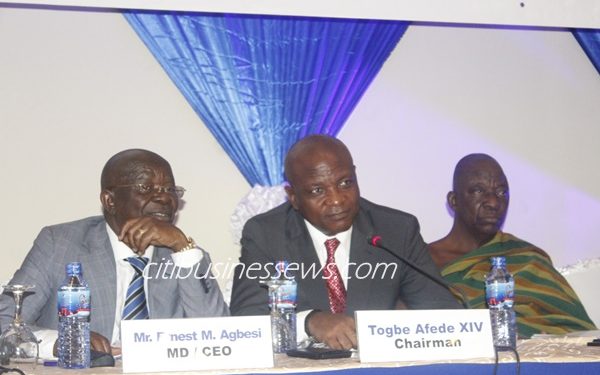 The Chief Executive Officer (CEO) of the National Investment Bank (NIB), Ernest Agbesi has stated that management is working to enlist the bank on the Ghana Stock Exchange (GSE).

According to him, the move will help the bank to grow its capital base and become more efficient.

“We are poised and will soon move to the stock exchange to trade on it. This will strengthen our position as one of the indigenous banks with a huge capitalization base in the country,” he said.

Speaking at the bank’s Annual General Meeting (AGM) in Accra, Mr. Agbesi recalled that 2015 was a difficult moment for the banking sector due to many challenges, including stiff competition in deposit mobilization.

“The sector recorded high Non Performing Loans and Loan Loss Provisions. Inflationary pressures were high and in response, the Bank of Ghana adjusted the Policy Rate to 26.0 percent up from 21.0 percent in 2014,” he added.

Blaming the high cost of lending and Treasury Bill rates on inflation, Mr. Agbesi stated that there is the need to get inflation at a moderate rate to stimulate growth.

“In spite of that, the banks employed every available means to bring their respective products and services to the doorsteps of customers,” he further noted.

Touching on the operating results of the bank, the CEO said, the strategic agenda pursued by the management and board yielded positive results.

“The bank recorded a significant improvement over the previous years in all aspects.  The Net Profit after tax was GH¢120.11 million for the year ended December 31, 2015 compared with GH¢ 79.39 million in 2014,” he explained.

The Board Chairman of the bank, Togbe Afede XIV announced a dividend of GH¢ 0.06 per share which was agreed by the shareholders.