Workers jubilate over transfer of shipyard management to GPHA 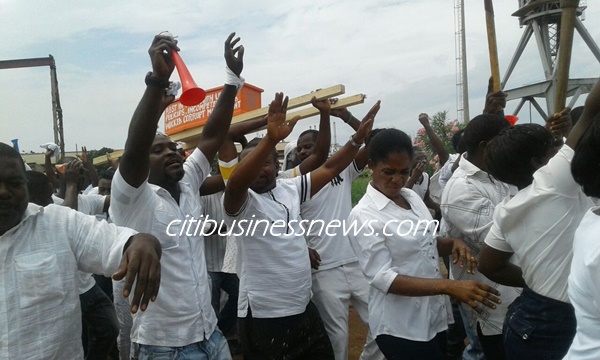 Workers of the Tema Shipyard have welcomed government’s decision to hand over the administration of the Shipyard and the Dry Dock Company Limited to the Ghana Ports and Harbours Authority (GPHA).

The workers contend that the move will enhance efficiency and increase government’s revenue.

“It means that we are moving from one zone to another and we believe that the GPHA will take care of us the way we want to be treated,” Chairman of the Senior Staff Association Christian Dogbe told Citi Fm’s Tema correspondent, Elvis Washington.

Cabinet yesterday announced that it has directed the Ministry of Transport to hand over the operations of the PSC Tema Shipyard and Dry Dock Company Limited (PSCT) to the Ghana Ports and Harbours Authority (GPHA).

A statement on the move also explained that the decision would in the long term attract the needed resources to venture into the building of Floating Production, Storage and Offloading (FPSO) vessels for the oil and gas industry even as it continues to provide services to the ports and harbours and related sectors in the short to medium term.

Transport Minister Fiifi Kwetey is however expected to conclude the official transfer to the GPHA within the next few weeks.

Transfer is a relief from ‘poor’ leadership

The workers earlier in May had demanded the withdrawal of the CEO over allegations of mismanagement leveled against him.

They had also demonstrated in support of his removal from office.

At the time, Transport Minister Fiifi Kwetey assured the workers he was going to take their concerns into consideration especially the termination of the appointment of their two colleagues.

“We are going to look into the termination properly in order to determine whether the proper procedure has been followed and if they have not been followed, we will take a decision in order to change that position.”

But the Chairman of the Senior Staff Association Christian Dogbe tells Citi Business News the move will reverse what he describes as the inefficient management by the company’s former MD; Alhaji Tunde.

“The style of management was very poor and his human relationship equally poor. A few years now there has been neither salary increment nor bonus for we the workers so all the Ghanaian workers had to leave to Nigeria, Cote d’Ivoire and Senegal.

“Before he took over we used to 52 vessels in a year service about 14 vessels in the first year; 18 in the second year while this year being the third year, up till June, we have serviced only 5 vessels,” Mr. Dogbe noted.