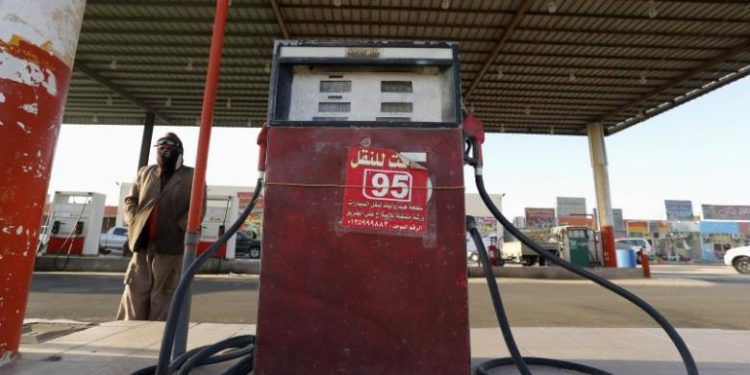 A fuel pump assistant stands next to an old fuel pump during the early hours near the village of Salwa at the Qatari-Saudi border, south of the eastern provience of Khobar, Saudi Arabia January 29, 2016. REUTERS/Hamad I Mohammed

Oil prices fell on Friday after the Saudi energy minister tempered expectations of strong market intervention by producers during talks next month, and as analysts pointed to an ongoing supply overhang that was weighing on markets.

International benchmark Brent crude oil prices LCOc1 were trading at $49.46 per barrel at 0658 GMT, down 21 cents from their previous close.

Saudi Arabian Energy Minister Khalid Al-Falih told Reuters late on Thursday that “we don’t believe any significant intervention in the market is necessary other than to allow the forces of supply and demand to do the work for us”, adding that the “market is moving in the right direction” already.

Members of the Organization of Petroleum Exporting Countries (OPEC) will meet on the sidelines of the International Energy Forum (IEF), which groups producers and consumers, in Algeria from Sept. 26-28.

The minister’s comments put a dampener on expectations of a meaningful intervention into the market, which has been dogged by oversupply for more than two years.

Iran said on Friday that it would cooperate with other producers to stabilize oil markets, but added that it expected others to respect its individual rights.

Many observers, however, interpreted that as Tehran saying it would continue to try and regain market share by raising output after the lifting of sanctions against it last January allowed a full return to oil markets.

“I do not expect the OPEC meeting in September to agree any freeze or affect the oil market in any significant way. This is because it appears key OPEC members remain more concerned about market share,” said Oystein Berentsen, managing director for crude at oil trading firm Strong Petroleum in Singapore.

Regarding the current supply overhang which has been weighing on oil prices for over two years, he said that he saw oil stocks globally “falling too slowly to sustain a higher price above $50 per barrel”.

U.S. investment bank Jefferies said on Friday that despite recent bearish data like record OPEC output and soaring Chinese fuel exports, it expected “the oil market to come into balance in Q4 and for inventory draws to accelerate into 2017, setting the conditions for a sustainable fundamental price recovery”.