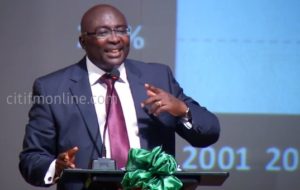 New Patriotic Party’s (NPP) running mate for the 2016 elections, Dr. Mahamoud Bawumia, has chastised government’s continuous borrowing warning that the country’s debt in dollar terms, would reach as much as $42 billion dollars by the end of December 2016.

Speaking at a lecture titled, ‘The State of the Ghanaian Economy – A Foundation of Concrete or Straw’, chaired by Former President John Agyekum Kufuor, Dr. Bawumia among others accused government of failing to put to good use the huge loans it has contracted.

[contextly_sidebar id=”pujk3WGQfPcc5KjJOJTWvNl9I8UiESS4″]“By the end of 2008 following the adoption and implementation of the HIPC initiative, the government’s policy framework of fiscal discipline, the country’s debt to GDP ratio, had declined from 189% in 2000, to 32% of GDP by 2008. Indeed from independence in 1957 to 2008, Ghana’s total debt was 9.5% Billion Cedis; however; in the last seven years alone under this NDC government, Ghana’s total debt has ballooned from 99.5 billion cedis to 100 billion cedis in 2015; and a 105 billion cedis by May 2016. In fact, 66% of Ghana’s debt from independence; has been accumulated under the presidency of John Mahama in just the last three and half years.”

Dr. Bawumia, who has constantly lambasted the government’s excessive borrowing explained that, “in terms of the of the dollar equivalent of the borrowed amount, this government has borrowed some 39 billion dollars in eight years. When I mention this, they either get confused or pretend to get confused; so for the sake of clarity, I have put in this document a table that shows them clearly the dollar equivalence of all the amounts borrowed from 2009 to 2016. In fact by December 2016, the government would have borrowed $42 billion dollars. The government would claim no doubt, that the book value of the debt is $26 billion dollars; but quite frankly that’s a weak argument. The only reason why the book value of the debt is $26 billion is because we are applying today’s exchange rate which the same government succeed in collapsing to the value of the debt; and not the exchange rate at the time the money was borrowed. With this major increase in the debt, Ghana’s debt to GDP ratio has increased from 32% in 2008, to 72% at the end of 2015.”

Dr. Bawumia accused the Finance Minister Seth Terkper of massaging debt to GDP ratio figures during his presentation of supplementary budget in July this year.

Dr. Bawumia said such excessive borrowing and the subsequent mismanagement of the economy, is to blame for the increasing levels of unemployment.

According to him,  the amount borrowed by the NDC administration since 2009, does not commensurate with the government’s claim of massive infrastructure development. According to the economist, the total cost of infrastructure from loans, grants and taxes from 2009 to date, is less than 7 billion dollars.

According to Dr. Bawumia, a large chunk of the money has been wasted through over-bloating of project cost and corruption.

Dr. Bawumia also outlined government’s failures in the management of interest rates and its impact on businesses and the banking sector, the energy sector among others.

A key feature of all budgets are the macroeconomic targets set out in the respective statements. The targets give an...