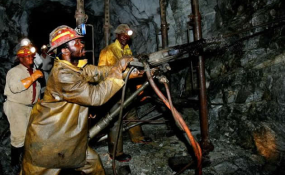 The mining sector accounts for just over 22 percent of the country’s gross domestic product (GDP). He said recent engagements with players in the mining sector had shown that the fees were still rather high despite an earlier downward review.

“Government, in January 2016, reviewed downwards mining fees and charges in order to enhance the viability of the mining sector, promote investment in prospecting and exploration activities, as well as advance the beneficiation agenda.

“However, further representations from the mining sector indicate that some of the fees are still considered high, hence the need for further review, targeted at enhancing the Ease of Doing Business in Zimbabwe.”

Earlier in January, the Government gazetted the Mining (General Amendment) Regulations, 2016 (Number 19), which set a new mining fee structure that both reduced and sought to standardise mining fees paid by miners to various Government agencies and Rural District Councils countrywide.

The proposed mining fees reduction would be the third one in as many years. In 2014, the Government slashed registration fees for special platinum blocks were reduced from $2,5 million to $750 000.

It also scrapped the $5 million registration fee for diamonds miners, among other reviews for several minerals. Observers say new investment into the minerals sector is likely to remain feeble going forward in view of prevailing weak commodity prices, hence the need for incentivisation.