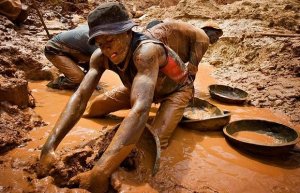 The Minister of Environment, Science, Technology and Innovation, Mahama Ayariga, is urging for collaboration with international agencies to deal with the menace of illegal mining activities in Ghana.

According to the Minister, illegal mining persists as a critical challenge to Ghana’s ability in addressing climate change issues.

The unregulated activities of the informal miners have led to undesirable effects including destruction of vegetation, pollution of water bodies as well as a marked reduction in agricultural production, among others.

The lack of implementation of interventions has been cited as one of the key factors that have led to the perpetration of the act.

But the sector Minister admits Ghana could win the fight if it adopts strategies through collaboration with other developed societies.

“We have that issue that we are working on and I believe that it is one area where we can forge stronger partnership to learn from one another and to build a capacity as an EPA to be able to work with the other sectors that must necessarily be involved to deal with the issues,” Mr. Ayariga stated.

He was speaking at an engagement session involving media practitioners, with the Environmental Protection Agency of the US, in Accra.

According to Mr. Ayariga, the impact of the illegitimate activities on agriculture and food production threatens human lives as the quality of life may be compromised.

“Agricultural activities taking place in locations where the waters are polluted, producing yields that are transported to market centers in urban communities that take their soul remotely related to the sites of these illegal activities,” he explained.

Galamsey activities have been more pronounced in areas such as Obuasi in the Ashanti region, Wassa Amenfi West, East and Central districts in the Western region as well as Dunkwa in the Central region.

Citi FM’s Obrempong Yaw Ampofo reports that the Chinese immigrants have largely succeeded in convincing the indigenes especially the youth, in the Amenfi Districts, to desert their traditional engagements in cultivating crops to find solace in the ‘pits’.

Some have also questioned the effectiveness of the Task force instituted by government to evacuate illegal miners and protect lives and properties in the affected areas.