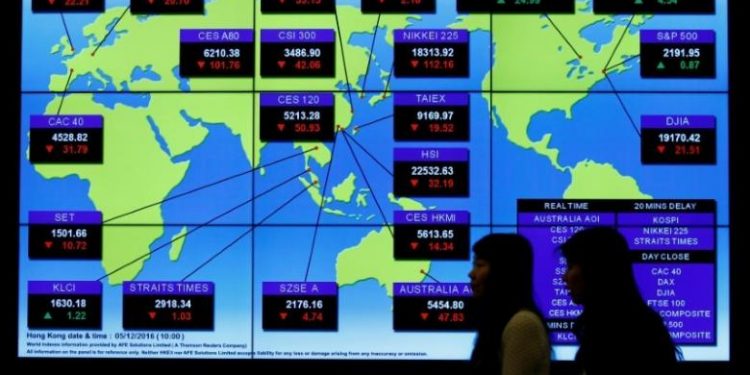 Asian stocks cut early gains as investor caution grew before a news conference by President-elect Donald Trump on Wednesday, where his views on global trade and China will be carefully scrutinized for future policy implications.

MSCI’s ex-Japan Asia-Pacific shares index .MIAPJ0000PUS was flat on the day, having risen as much as 0.5 percent after posting a rare loss in the previous session. Australia’s S&P/ASX200 rose 0.9 percent while Hong Kong shares .HSI rose 0.2 percent.

ADVERTISEMENT
Trading was light because Japan is shut for a holiday.

The caution in Asia is expected to ripple into European markets with futures pointing to a cautious start for various exchanges. FFIc1 FDXc1

“The dollar’s rising strength will be a growing concern for Asian markets, particularly Hong Kong, and investors will be waiting for Trump’s comments to get some clues on what areas the new administration will focus on,” said Alex Wong, a portfolio manager at Hong Kong-based Ample Capital.

Foreign investors will be wary of buying Hong Kong assets as the currency is pegged to the U.S. dollar, while the domestic business environment, particularly for retailers, will suffer more as residents up spending abroad.

Notwithstanding the growing worries around Trump’s stance on trade with emerging markets, 2017 has begun on a positive note in terms of capital flows for Asian markets, helped by an extended rally in U.S. equities.

But with markets perched at record highs and valuations at the upper end of historical trading ranges, particularly in the United States, market analysts are keenly aware that even a small disappointment from Trump’s policy proposals could trigger a massive wave of profit-taking.

In currencies, the dollar started the week on a firm note after Friday’s data showed a rebound in U.S. wages, pointing to sustained labor market momentum and more rate increases by the U.S. Federal Reserve.

“With expectations of more rate hikes on the horizon, we believe the dollar will resume its upward trend versus emerging market Asia currencies in the coming weeks,” Gao Qi, an FX strategist at ScotiaBank in Singapore, wrote in a client note.

China’s yuan CNY=CFXS gained on Monday after Beijing’s daily official fixing was stronger than market expectations and following weekend news that foreign exchange reserves fell to near six-year lows as authorities stepped up their intervention to protect the currency.

Bonds were stung by the strong U.S. data, with both two-year and 10-year U.S. Treasury yields inching higher as market participants eyed the probability of more rate hikes in 2017.

The yield on two-year U.S. Treasury notes US2YT=RR was perched at 1.21 percent, off Thursday’s low of 1.17 percent.

Oil prices edged lower, thanks to a stronger dollar and growing concern whether OPEC producers would stick to an agreement to cut output. Brent crude futures LCOc1 were down 0.3 percent in early trade.