Asian stocks rise for 8th day on PMIs; yuan soars ahead of inauguration 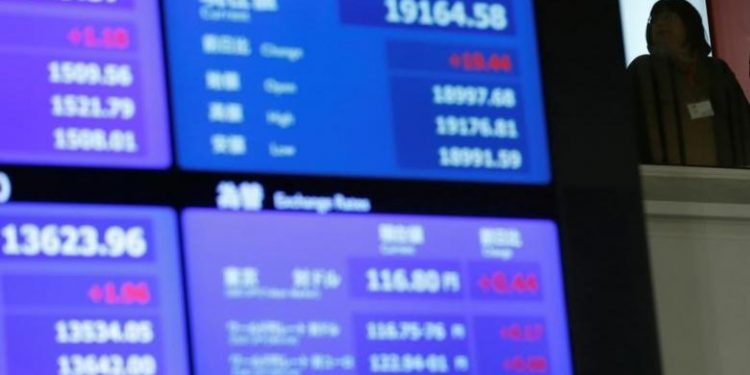 A stock quotation board displaying Japan's Nikkei average is seen before a ceremony marking the end of trading in 2016 at the Tokyo Stock Exchange (TSE) in Tokyo, Japan December 30, 2016. REUTERS/Toru Hanai

Asian stocks climbed for an eighth consecutive day on Thursday, buoyed by further gains on Wall Street and an overnight bounce in oil prices that bolstered energy and resource shares.

Also underpinning the cautious streak of optimism has been a steady stream of upbeat factory and service sector surveys out of the U.S., Europe and Asia this week, prompting some banks to raise their global growth forecasts for 2017.

European stocks are set to take their cues from a firm Asia with index futures pointing to modest gains.

ADVERTISEMENT
MSCI’s broadest index of Asia-Pacific stocks outside Japan .MIAPJ0000PUS rose more than 1 percent, extending a rally that has seen it gain 2 percent in the opening days of 2017.

“Recent economic data is pretty good so markets are in risk-on mode overall and the dollar is supported. But U.S. bond yields are being capped so the dollar is losing the driver behind its rally,” said Yukio Ishizuki, currency strategist at Daiwa Securities.

U.S. shares ended higher on Wednesday even after minutes from the Federal Reserve’s December meeting showed concerns that quicker economic growth under the Trump Administration could require faster interest rate increases to ward off inflation. [.N]

The FOMC minutes noted upside risk to growth forecasts and uncertainty over the level of fiscal stimulus, while some members warned that the tighter labor market could signal a more aggressive path of rate increases.

Still, with just over two weeks before U.S. President-elect Donald Trump takes office, Fed officials and global investors are also waiting for evidence that his campaign promises will be approved by Republican lawmakers and kick the U.S. economy into higher gear.

“The December minutes reinforce our view that the FOMC remains on a cautious and gradual rate hike trajectory amid an uncertain fiscal and economic outlook,” OCBC said in a note.

Valuations for Asian stocks are near 10-year averages in terms of price-to-book and a price-to-earnings multiples, according to Reuters data.

Growth in China’s services sector accelerated to a 17-month high in December, a private survey showed, adding to views that the world’s second-largest is entering the new year with stronger momentum.

The strong pick-up mirrored improvements in manufacturing surveys earlier this week, as market watchers debate whether China’s leaders will settle for a more modest growth target this year in order to focus on more pressing issues such as an explosive growth in debt.

In currencies, the dollar briefly stumbled after policymakers noted extended gains in the greenback would weigh on inflation, though it managed to pare losses by the end of a choppy U.S. session.

China stepped into both its onshore and offshore yuan markets to shore up the faltering yuan for a second day on Wednesday, sparking speculation that it wants a firm grip on the currency ahead of Trump’s inauguration on Jan. 20. [CNY/]