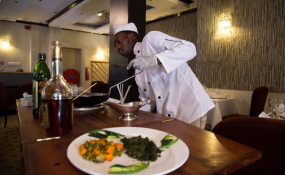 Tirsit Mezemer, the executive chef at Kaleb Hotel, and her associates are running here and there in the spacious kitchen of the four star hotel.

“If you have the passion, being a chef is a great profession,” she proudly states.

“The executive chef is not only a chief who commands his or her subordinates sitting at the top,” she told Fortune.

As Addis Abeba’s hotel industry booms, the culinary profession has become a trade in demand.

Among other things, the executive chef is responsible for recruiting and managing kitchen staff; creating and modifying menus, and keeping track of kitchen deliveries.

“Every trainee at the hotel and tourism colleges dreams of a job like executive chef,” says Biruk Adamu, an executive chef at Momona Hotel and instructor at Albert and Benvenido Hotel and Tourism College.

Under the head chef’s supervision there are sous chefs, who are the second in command in the kitchen hierarchy, the chef de partie, who is responsible for a specific area, such as fish or pastry, the demi chef, who butchers meat and chops vegetables, as well as cooks and stewards.

As Addis Abeba’s hotel industry booms, the culinary profession has become a trade in demand.

Guests from all over the world, tourists, diplomats and business people come to Addis Abeba. However, the demand and supply haven’t been keeping in step with each other.

Tirsit has witnessed the evolution of the profession for the last eighteen years. When she joined the profession on the bottom rung as a steward in 1998, there were few chefs in the city.

“With only a few hotels and restaurants, the profession was at its infant stage. There were only a few chefs. They moved between the restaurants and hotels every day,” she said. “But these days, every hotel and restaurant has its own chef.”

Skill, experience, and the scientific knowledge of food preparation are crucial components in the culinary world.

Experience and skill were not sufficient for Tirsit to become a professional.

“I joined a hotel and tourism college and studied the science of food preparation,” she explained.

She has learned the preparation of both national and international foods.

“Experience is the most important aspect in the profession.There are many people graduating from culinary schools who fail to pass exams when they try for a job at our hotel,” Tirsit added.

When Tirsit began working as a steward at Ras Amba Hotel 18 years ago, she used to earn 150 Br a month.

But today the payment in the same position has risen to a minimum of 800 Br per month.

Viad Fitsum, a retired chef from Mama’s Kitchen, used to earn 3500 Birr before her retirement a year ago. Five years ago, a cook used to earn around 500 Br on average.

The salary for head chefs differ from one hotel to another. Executive chefs working in five star hotels earn an average of 60,000 Br per month. The minimum pay at such hotels is 20,000 Br.

However, one of the biggest complaints in the industry is that the government is turning a blind eye to its struggles.

As the standard of the hotel goes down, payment diminishes, but even average hotels pay a minimum of 4,000 Br per month.

“Since the salary that professional chefs demand is very high, we choose less trained, more experienced candidates,” the manager of one three star hotel said.

Some restaurants also rank at the higher end of the salary scale. Restaurants frequented by foreigners pay an average of 20,000 Br per month.

“Foreigners working as chefs in Addis are better paid without having better skills,” the dismayed chef of a Bole restaurant told Fortune. There are hotels that pay up to 100,000 Br for foreign chefs.

Hotel and tourism colleges that train culinary professionals are also proliferating. For graduates of culinary colleges, like Biruk, finding employment is not hard.

“If you have the skill along with strength of character, finding a job is not too difficult,” he told Fortune.

While he was a student at Entoto Technical and Vocational College, he joined Embilta Hotel as a demi chef through an internship opportunity.

“If you have the skills you are not expected to jump through hoops for a promotion,” he said. “Creativity is a significant skill in preparing foods.”

“We prepare national and international dishes based on the wishes of our customers,” Biruk said.

“I hire five assistants and complete the job within a day,” he said.

With three branches, Bienvenido Hotel and Tourism Institute had 1,127 graduating students at the end of this academic year, 900 of whom trained in cookery. When they opened the school they had 130 cookery students.

“The numbers speak for themselves in showing how the profession is developing,” explained the Dean of the institute’s Piazza branch.

“Although there are signs of improvement, the profession is still underdeveloped,” said Mahlet Minda, manager of Damat Hotel and Tourism College.

The demand for well-trained workers in the culinary industry is very high. Many hotels hire the many hotel and tourism graduates knocking at their gates.

“In addition to insufficient human resources in the market, the quality is also disturbingly low,” one hotel manager said. “People joining the professions are attracted by the earning potential but many don’t have the passion.”

Damat Hotel and Tourism Institute, established a year ago, started out with only a few students, but has now grown to 70 students.

“Although it’s a high earning career, there are still negative perceptions and prejudices,” Mahlet told Fortune.

It requires a large amount of resources to open a hotel and tourism college. The expenses for equipment, rent and teachers’ salaries is very high.

“In addition, we are incurring higher costs for the food items that the students practice with,” Mahlet explained.

Damat charges 700 Br a month to students. A year ago, when the institute was struggling, it opened its doors to people from lower income backgrounds, with a lowered fee of 350 Br.

“No one came. Many of the students from poorer backgrounds quit the training,” Mahlet explained.

“The other bottleneck that hinders the development of the profession is a negative societal attitude,” said Solomon Tilahun, a chef and teacher at Bienvenido. “Many well-to-do families would never send their children to schools like these.”

However, one of the biggest complaints in the industry is that the government is turning a blind eye to its struggles.

“We should have gotten tax incentives for purchasing all the necessary equipment for our schools,” said a tourism and hotel institute dean.