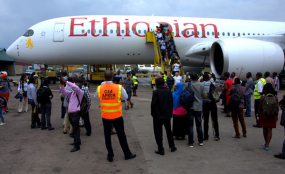 Ethiopian Airlines, Africa’s largest airline group, announces that it will launch seven new destinations in five months time. This is one of the greatest expansions in Ethiopian’s long and illustrious history.

In a press release, Ethiopian said it would launch new service to Victoria Falls (Zimbabwe), Antananarivo (Madagascar), Conakry (Guinea), Oslo (Norway), Chengdu (China), Jakarta (Indonesia) and Singapore (Singapore) starting from February to June. With the addition of these stations, Ethiopian would have service from Addis to 98 different international cities across the world.

Ethiopian Airlines Group CEO, Tewolde Gebremariam said: “Africa’s share of the Global Aviation is the smallest which is only around three percent. As the largest airline group in the continent, we are highly concerned on the low base of air connectivity in the continent.”

Tewolde also said: “Looking beyond the current economic slowdown especially in the oil export dependent economies of Africa, we firmly believe that the continent will become the magnet for foreign direct investment, trade and tourism, which are the engines of air travel growth.”

“In turn efficient air connectivity also drives socio-economic development and we are happy to contribute our share in the 21 st Century African Transformation” the CEO added.

Ethiopian is one of the fastest growing airlines in the world, and is stretching its wings every year to new destinations.