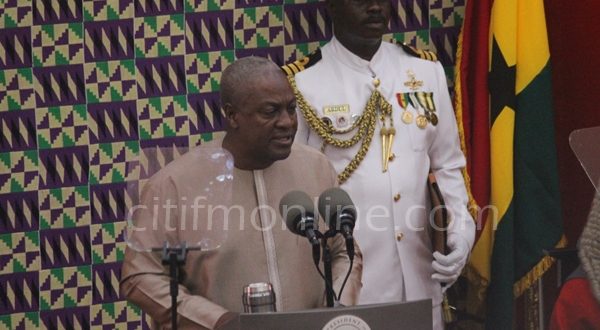 President John Mahama has touted his administration’s achievement in what he describes as a major turnaround in the country’s power sector.

According to him, the increased generation capacity and a relative stable supply system has lessened the plight of consumers recently.

The President made the remarks when he gave his final State of the Nation Address in Parliament on Thursday, January 5, 2017.

“The increased power generation in addition to the energy sector levy and ongoing works to restructure the legacy debts of the power utilities, have helped to stabilize the power situation in our country,” he said.

Mr. Mahama added, “With the expectation of more domestic gas from the TEN and Sankofa fields, Ghana is entering into an era of energy self sufficiency.

Meanwhile the government has announced that it is engaging the World Bank to optimize the use of the increased generation capacity.

“Indeed the warning signals have started sounding about the danger of over capacity and excess redundancy in our power generation sector. We have agreed to work with the World Bank to rationalize the addition of new plants and ensure we achieve optimum utilization of existing plant capacity,” John Mahama said.

Industrial and domestic users of power have had to bear the brunt of a reeling power sector for at least the past three years.

The development also led to massive job layoffs and a major distortion to economic growth targets for the period.

Though the situation has stabilized for some time now, industry watchers have cautioned of a likely resumption of load shedding if nothing is done to secure enough gas for power generation.

In the meantime President Mahama is optimistic the impressive trends will continue even with the inauguration of a new government.

“Access to power under my administration has continued to increase Ghana has one of the highest access to electricity estimated to be 80% currently. Additional pending electrification programs like the China Water Company Programme and the Hunan Energy Projects will bring even more communities onto the national grid.”

The President’s assertions comes a day after the Industrial and Commercial Workers’ Union (ICU) warned of a redundancy if government fails to heed threats of disruption in gas supply for the first quarter of 2017.

The Union argues the decision will become inevitable if industry is unable to sustain possible hikes in operational costs.