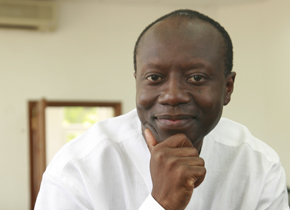 He will replace Seth Terkper who served under the immediate past administration.

Ken Ofori Atta is Co-Founder of Databank Financial Services Limited and served as its Executive Chairman from 1990 to February 14, 2012.

Announcing his appointment at the Flagstaff House, Nana Akufo Addo described Mr. Ofori Atta as someone who has the “capacity and insight to move modern economies”.

Mr. Ofori-Atta has rich experience in finance and administration.

He has worked with Salomon Brothers and Morgan Stanley, on debt and equity issues and financing for a variety of industries.

He is a Co-Founder of the African Leadership Initiative of the Aspen Global Leadership Network.

He serves as the Chairman of both Trust Bank Limited as well as Family Ventures and Offices.