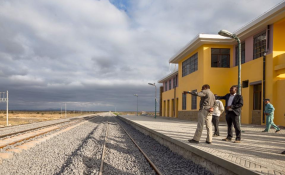 Kenya Railways Corporation (KR) has come to the defence of the construction of the Standard Gauge Railway following concerns over the cost compared to other railway projects in the continent.

The Corporation Managing Director Atanus Maina says the Standard Gauge Railway (SGR) is built based on the needs of the country which is to primarily ease the moving goods to and from the port of Mombasa.

Speaking to Capital FM Business, Maina says Kenya’s objectives for the railway are different from those of other countries like Ethiopia, and that the dynamics of rolling out the massive infrastructure projects are different.

“Ethiopian corridor has enough level crossings as it passes through areas where they don’t have a lot of people. For Kenya, the area is heavily inhabited… we had to do a lot of bridges and we needed to have more stations and land compensation, this will definitely have a huge impact on cost,” he noted.

Maina said Kenya has 33 crossing stations with overpasses in large sections to allow wildlife migration while Ethiopia has 18 stations.
He urged Kenyans to stop comparing the locomotives with the bullet trains in Morocco citing that locomotives are not supposed to be beautiful.

“The Moroccan government has identified they need to move five million people between Tangier and Casablanca which is a very popular location for tourists and they want to move as many people as they can. Bullet trains are passenger trains only, our lines are both passenger and freight but mainly freight since we do not have such passenger demand,” he said.

He also adds that Kenya does not have the power capacity to run an electric train. Ethiopia’s Grand Renaissance Dam is expected to generate 6,000MW with the first 750MW coming into the grid this year.

Phase one of SGR from Nairobi to Mombasa stretches for 472 Kilometres at a cost of Sh327 billion while the Ethiopia’s first fully electrified cross-border railway line in Africa, linking Ethiopia’s capital, Addis Ababa, to the Red Sea port of Djibouti – a stretch of more than 750km – cost the country Sh340 billion.