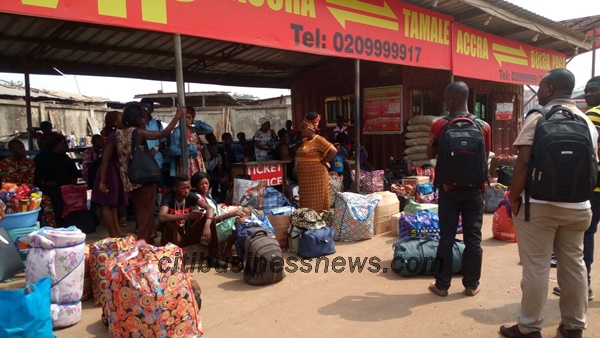 VVIP bus drivers who ply the Accra-Kumasi route have ditched their work following the low patronage of their service from Kumasi to Accra.

The low patronage has been attributed to the ongoing funeral of the late Asantehemaa which commenced today.

The development has left scores of passengers at the VVIP bus stations in Accra heading to Kumasi stranded.

Long winding queues of passengers were seen at the various VVIP stations at Circle at the time Citi Business News visited the bus stations.

The queues were only present at the Accra-Kumasi route.

Passengers who spoke to Citi Business News said they had been waiting in the queue since morning.

“I can’t really explain it myself, the queue is quite long, It’s longer than usual and I think we can relate it to the funeral of the Asantehemaa. Majority of people want to go to Kumasi for the funeral so that is probably causing the unexpected number we are seeing here,” a stranded passenger said.

Meanwhile a passenger who was waiting for a bus to attend the funeral in Kumasi also told Citi Business News,“The shortage of the buses is as a result of the funeral. Everybody wants to go including we here. There are no buses available but I know that we will definitely go.”

Most bus drivers have also ditched the route due to the low patronage of passengers from Kumasi to Accra because of the funeral of the late Asantehemaa.

“The problem is that most of the cars are in Kumasi and according to them there are no passengers in Kumasi so all the buses are locked up there because of the funeral and it seems like nobody is coming to Accra so that’s why there are long queue here.” a manager at the VVIP station stated.

Meanwhile officials say the situation is expected to be rectified in a few hours.

“There are five buses coming empty as we speak, they are on the way so passengers will soon be out of here”.

Meanwhile it appears the fashion industry is recording massive gains following the funeral rites of the late queen.

Citi Business News checks reveal sale of black cloth in the Ashanti Region and specifically Kumasi has picked up tremendously.

Some traders who spoke to Citi Business News say they intend to cash in heavily following the development.

“People are really purchasing the cloth. Six yards goes for GHc90 and one yard for GHc15, they are available in red and black, white and black yellow and brown. People are purchasing all the colors but the one in brown are limited as compared to the other colors.”

Another trader admitted to the boost saying “For the clothes we have them in red yellow and white and sales are really good because everybody wants to purchase some. We will not run out of the cloth because we made them after the news of her death and everybody wants to buy it,” she added.