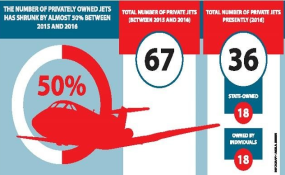 The number of privately owned jets in Nigeria has shrunk by almost 50 per cent between 2015 and 2016, checks by Daily Trust have shown.

Within this period, no fewer than 31 private jets have been de-registered with the aircraft either sold off or returned to their owners abroad.

The development, it was gathered, is not unconnected with the economic downturn and the high cost of maintaining a private jet which is said to have doubled in recent times.

Information gathered from the record of the Nigeria Civil Aviation Authority (NCAA) yesterday indicated that there are currently 36 private jets registered in the country comprising of 18 state-owned and 18 owned by individuals and corporate companies.

Prior to the assumption of office of President Muhammadu Buhari in 2015, there were 67 private jets though all registered in foreign companies but owned by highly placed individuals.

It would be recalled that former President Goodluck Jonathan had equally boasted in May 2014 that Nigeria could not be categorized as among the poorest countries because of the ownership of private jets by many Nigerians.

“If you talk about ownership of private jets, Nigeria will be among the first 10 countries, yet they are saying that Nigeria is among the five poorest countries,” he had said during the Workers’ Day rally at the Eagle Square on May 1.

However, the trend seems to have changed as the number of private jets in the country has declined drastically due to what an aviator called recession that has hit the country.

This has forced many private jets to be returned to their owners as the cost of maintenance kept soaring amidst the foreign exchange scarcity.

A source at the NCAA who also confirmed the development to Daily Trust blamed it on recession, saying, “Of course you know there is recession and it is much more expensive now to maintain a private jet.”

Another source said what has shot up the cost of maintenance is the dollar scarcity which has affected the entire aviation sector.

Besides, the cost of fuelling the aircraft has also increased by over 150 per cent. A litre of Jet A1 was sold for between N105 to N115 early last year but the price has jumped to over N250 at the moment.

Also, a private jet owner pays landing, parking and handling fees like any commercial airline – such person would pay over-flight charges for regional or international trips.

Daily Trust also learnt that the economic recession has cut patronage of private jet hire operators by over 50 per cent as some VIPs now prefer to pay for a First Class or Business seat for their travel plans instead of chartering a jet.

A staff of one of the charter companies also said, “Unlike sometimes when this place was very busy, the traffic movement has reduced drastically, maybe by 50 per cent.”

A pilot who gave an insight into the operation of private jets on condition of anonymity hinted that an average sum of $5000 (about N2.5 million at N490/$) would be needed per hour to maintain a private jet.

Commenting on the issue, Rector of Ilorin International Aviation College, Capt. Nurudeen Abdulkareem, noted that moving out an aircraft because of the recession is a wise decision. He said, “Of course if you can’t make business you move somewhere where you can make market instead of incurring overhead unnecessarily. It is a business decision.”

“If you lease an aircraft and when there is no more free money here and there and there is economic meltdown, it is a very wise decision, that means you don’t deserve that luxury that you are putting yourself, you are living above what you could do.”