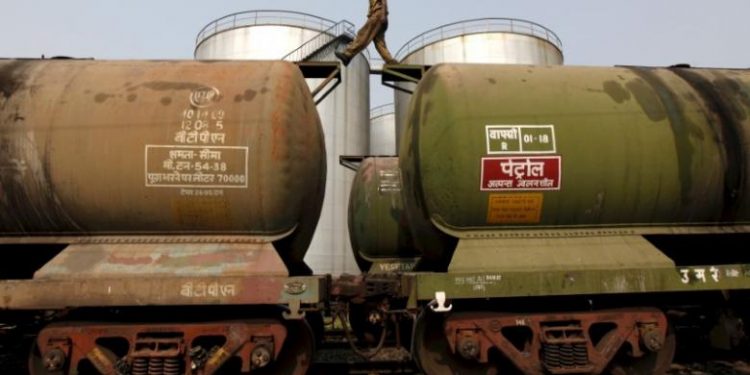 FILE PHOTO: A worker walks atop a tanker wagon to check the freight level at an oil terminal on the outskirts of Kolkata, India November 27, 2013. REUTERS/Rupak De Chowdhuri/File Photo - RTSXE0K

Oil prices rose on Thursday, driven up by a weakening dollar, though gains were capped by plentiful supplies and bulging inventories despite efforts by OPEC and other producers to cut output to prop up the market.

Traders said the gains were largely because of a weakening dollar, which has lost 3.9 percent in value since peaking in January. Oil is traded in the U.S. currency and a weaker dollar makes fuel purchases less costly for countries using other currencies, potentially spurring demand

However, oil prices were capped by data from the U.S. Energy Information Administration (EIA) showing an increase of 2.84 million barrels last week in U.S. crude inventories to 488.3 million barrels, pointing to ample supply in the world’s biggest market.

U.S. oil production has risen by 6.3 percent since the middle of last year to 8.96 million barrels per day (bpd).

“Crude oil and other liquids inventories grew by 2 million bpd in the fourth quarter of 2016, driven by an increase in production and a significant, but seasonal, drop in consumption,” the agency said.

Rising U.S. output and inventories are likely to limit the impact of the agreement by the Organization of the Petroleum Exporting Countries and other producers, including Russia, to cut supplies in an effort to reduce a global glut.

OPEC and other exporters have said they will reduce production by almost 1.8 million bpd during the first half of 2017. Industry figures suggest that many of those cuts have already been made.

Key customers in Asia are being spared any significant cuts because producers fear losing market share to competitors.

Crude supplies to Japan from its biggest supplier Saudi Arabia will not be affected by last year’s agreement between OPEC and non-OPEC countries, the deputy minister for company affairs at Saudi Arabia’s Ministry of Energy, Industry and Mineral Resources said in Tokyo on Thursday.

However, analysts say that Saudi Arabia is set to cut supplies, mainly of its medium-to-heavy grades, to some customers in Asia, which may give rival suppliers the opportunity to step in.