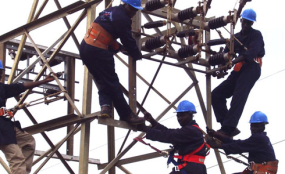 Rwanda can now produce enough power to service all those who need it in Kigali, the Chief Executive of Rwanda Energy Group (REG), Jean Bosco Mugiraneza, has said.

Mugiraneza, who was addressing journalists in Kigali, yesterday, said besides being able to provide electricity to everyone who needs it, REG had embarked on different projects that will also purge general load shedding issues.

In Kigali, REG is, among others, building a sub-station at the Kigali Special Economic Zone on the area that was cut out for factories.

“We no longer have to cut off one side to service the other. We have enough electricity for everyone. We have also started a project to revamp, upgrade and increase the capacity of Kigali sub-stations, where we are building one in Gahanga, renovate the one of Jabana and Mount Kigali so that we are able to provide electricity to locals in long-term but also to support the factories that are going to be based in Bugesera. When all this is done, load shedding will be history,” he said.

The plan to solve power issues is not limited to Kigali. In Southern Province, Mugiraneza said the Rukarara sub-station is complete and is already helping solve the issue of inconsistent power supply that has affected Nyamagabe, Huye, Nyaruguru, Nyanza, and Ruhango.

“Due to the long distribution line from Kigoma through Huye to Nyaruguru, there were issues that sometimes used to force about six districts to be cut off at the same time. That issue is now fixed and we are saving electricity that was being lost through those channels,” he said.

Mugiraneza said REG was also focusing on the Gabiro sub-station as a solution for the weak Nyagatare-Kagitumba power supply, adding that it should be near completion by the end of the year.

CIMERWA cement plant at Bugarama is now on the national grid and its being serviced by the Gishoma peat plant.

On top of this, Gaciye II, a private energy plant, is also complete and operational bringing the total capacity of electricity produced all over the country from the previous190 megawatts to 208.

The Managing Director of the Energy Utility Corporation Ltd, Jean Claude Kalisa, said that after slashing electricity tariff, there was a plan to invite industry and factory owners to advise them on how best to pay less for more.

“For instance, it is cheaper for them to use electricity between 11pm and 8am. All this is in line with supporting industries to develop,” he said.

Addressing the issue of cash power breakdown over the week that left many people unable to purchase electricity, Kalisa said the change in the tariff was one of the reasons to blame but added that technical hitches compounded the problem.

“We were ready for the tariff changes to take effect on January 1 as planned but even if we had upgraded the capacity of our system, the technical issues that arose were beyond our control,” he said.