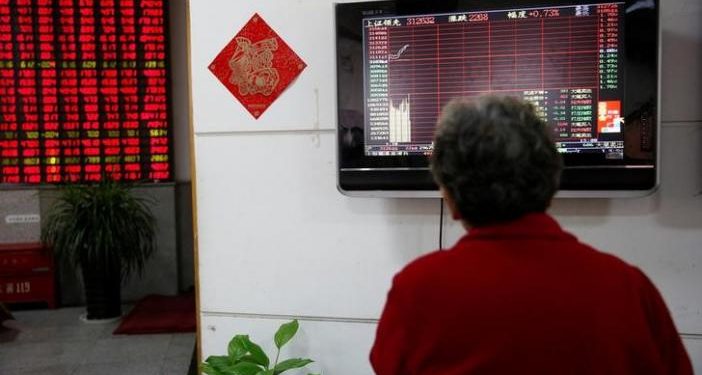 An investor looks at an electronic board showing stock information on the first trading day after the New Year holiday at a brokerage house in Shanghai, China, January 3, 2017. REUTERS/Aly Song

Asian stock markets rose on Tuesday while crude oil prices languished near three-week lows, with investors uncertain whether output cuts by some major exporters would be enough to offset increasing supplies from other producers.

European markets were poised for a lackluster start, with financial spreadbetter CMC Markets expecting Britain’s FTSE 100 .FTSE, which touched a record high as the pound retreated, to open flat; and Germany’s DAX .GDAXI and France’s CAC 40 .FCHI to start the day down 0.2 percent.

But Japan’s Nikkei .N225 resumed its declines, closing down 0.8 percent as the yen strengthened.

China’s CSI 300 .CSI300 was little changed, largely shrugging off further signs of improvement in the industrial sector. Data earlier in the day showed producer inflation surged to a more than five-year high in December as raw materials prices soared.

Oil prices were little changed after falling nearly 4 percent on Monday, their biggest one-day loss in six weeks. The drop was spurred by fears that record Iraqi crude exports in December, increased supplies from Iran and rising U.S. output would undermine an agreement by exporters, led by Saudi Arabia and Russia, to curb production.

“It’s certainly conceivable that the agreement falls apart and you get more production than anticipated in addition to already thinking that it (the oil price) should be lower because of dollar strength.”

Sterling edged lower on Tuesday after sharp drops on Monday and Friday pushed the currency to its lowest closing level since Oct. 11.

Standing at $1.215 on Tuesday, the British currency was 0.1 percent weaker, building on Monday’s fall of 1.0 percent, and Friday’s 1.1 percent drop.

Prime Minister Theresa May’s comments on Sunday that Britain would not be keeping “bits” of European Union membership stoked fears of a “hard Brexit”, as she said border controls would be prioritized over market access.

EU officials say Britain cannot have access to its single market of 500 million consumers without accepting the principle of free movement.

The U.S. dollar was down 0.4 percent at 115.53 yen JPY=D4 on Tuesday, ahead of a news conference by U.S. President-elect Donald Trump on Wednesday, his first since winning the November election. Investors are hoping for clues on Trump’s spending plans, amid views that higher outlays will spur inflation and further rises in U.S. interest rates.

The dollar index .DXY, which tracks the greenback against a basket of six global peers, slipped 0.3 percent to 101.63, extending Monday’s 0.3 percent loss.

Investors’ quest for safety was a boon for gold XAU=, which added 0.5 percent to hit its highest price in more than a month, and lingered close to that level at $1,187.05 an ounce.