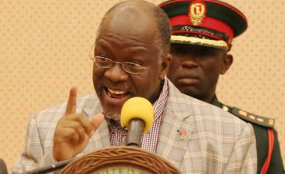 President John Magufuli has come out strongly in condemnation of unscrupulous businessmen, politicians and the media for creating artificial food shortage.

He has also ordered immediate review of the costs estimated for the construction of Simiyu Regional Hospital down from the whopping 46bn/- to around 10bn/-.

Addressing a public rally in Simiyu yesterday where he is on a two-day tour of the region, Dr Magufuli said the same businessmen were propagating stories of artificial food shortage through the media so that they can capitalise on the situation and get exemption on food imports.

He noted that whenever there was famine, some business people use the media and some politicians to propagate that there was severe famine in Tanzania when they already have thousands of tonnes of low-quality imported maize waiting to be offloaded for sale in the country.

“They used the media and some politicians to spread stories that there is famine in Tanzania. But surprisingly, by then they had already imported low quality maize from Brazil and wanted the government to waive taxes so that they can gain more profit while we lose revenue.

There is one businessman who has imported 25,000 tonnes of maize but I have refused to waive taxes on the cargo,” he told the rally. He took to task some Members of Parliament (MPs), who last year appealed to the government to allow farmers to sell agricultural produce such as maize and rice to Uganda, claiming that there was bumper harvest in the country.

“The MPs supported this appeal but I refused … and now the same MPs are crying that there is food shortage. I want to make it clear that my government will not provide food relief. I want Tanzanians to plan and work hard.

I am the one who knows when there’s hunger and it’s not the media or the business people,” he stressed. President Magufuli said it was logical that in times of shortage of rains, farmers must cultivate crops that do not need a lot of water (drought resistant) as is the case with maize and rice, stressing that the government will not be bailing out the public every time on trivial issues.

“I passed along the lake (Lake Victoria) on my way and there was a farm beside it that had onions, tomatoes and maize that had dried up. So why couldn’t the farmer use water from the lake to irrigate the maize instead of letting them dry up and then cry of hunger,” Dr Magufuli wondered.

The president said it was funny to see the Wasukuma also complaining of food shortage while they could sell some cattle and use the money to buy food reserves.

On inflated costs of the hospital building, the president ordered the Minister for Works, Transport and Communications, Professor Makame Mbarawa, to hold accountable all the concerned consultants for the theft attempt.

Speaking shortly after laying the foundation stone for the building, Dr Magufuli said the entire estimates and designs for the project should be revisited since they smelt of corruption and massive misappropriation of funds. Proving his case, President Magufuli said the facility could not be compared with the recently-built University of Dar es Salaam hostel, where 20 units of four storeys each were constructed at a cost of a mere 10bn/-.

“I have seen the hospital building under construction and I strongly disagree on the mentioned costs, which I believe are too high. I will dish out only 10bn/- for the same and ask for the Minister of Works to hold all behind this scam accountable,” he stressed.

He said it was total misuse and theft of funds to consider building the health college as a component of the regional hospital project, insisting that it was uncalled for since many health experts were graduating from other colleges and posted for service country-wide.