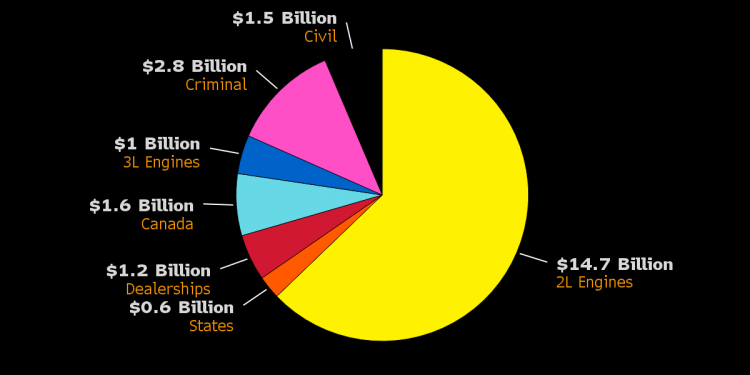 Volkswagen AG took a major step toward resolving one of the darkest chapters in its history Wednesday, agreeing to plead guilty in the U.S. to an emissions-cheating scandal and agreeing to pay $4.3 billion in penalties, while prosecutors announced charges against five individuals in Germany.

VW admitted to using false statements to import cars to the U.S. and obstructing investigations when authorities grew suspicious of the emissions levels from the diesel engines. Among the executives charged today with conspiracy were Heinz-Jakob Neusser, who was suspended in 2015, Jens Hadler and Richard Dorenkamp.

The emissions cheating undermined the sterling reputation of German engineering and threatened the viability of a company that vies with Toyota Motor Corp. as the world’s biggest carmaker. Volkswagen pressed to resolve investigations and lawsuits as quickly as possible, while working to repair its reputation with car buyers and dealers. It’s now selling more cars and trucks than ever, offsetting declines in the U.S. with strong sales in China. The company and its executives are still under investigation in Germany and it faces investor lawsuits in the U.S. and at home.

“Volkswagen deeply regrets the behavior that gave rise to the diesel crisis,” Chief Executive Officer Matthias Mueller said in a statement. “We will continue to press forward with changes to our way of thinking and working.”

Neusser was head of engine development and a member of the VW brand’s management board. Lawyers for him and Dorenkamp didn’t immediate respond to requests for comment. Representatives for the other men couldn’t immediately be reached.

A total of seven men have been charged so far, with one U.S.-based engineer pleading guilty in September and cooperating in the probe. Over the weekend, Oliver Schmidt, VW’s liaison with U.S. environmental regulators, was arrested in Miami as he was returning to Germany from vacation. Germany doesn’t extradite its nationals to the U.S. and Attorney General Loretta Lynch said at a press conference in Washington on Wednesday that it’s “too early” to say how it would handle prosecutions for individuals there.

VW admitted in 2015 that about 11 million diesel cars worldwide were outfitted with so-called defeat devices, embedded algorithms used to game emissions tests. The settlement pushes the cost of the scandal to more than $23 billion in the U.S. and Canada and will force the company to increase the money set aside to pay fines and compensate affected customers, which currently totals 18.2 billion euros ($19.1 billion).

The government and Volkswagen have been trying to reach a settlement by Jan. 20 before Donald Trump is sworn into office and many of the people who have been overseeing the case step down.

“The investigation is still open and it is ongoing,” Lynch said. “Volkswagen knew of these problems and when regulators expressed concern Volkswagen obfuscated, they denied, and they ultimately lied.”

The Volkswagen plea, filed in federal court in Detroit, serves as a capstone for Lynch’s enforcement of corporate misconduct and stands as one of the top environmental cases pursued under President Barack Obama. Investigated in just over 16 months, the Justice Department case also delivers on promises to hold individuals accountable.

In 2014, as U.S. suspicions increased about the real level of emissions from VW diesel cars, engineers and supervisors plotted ways to hide the defeat device, according to court documents. The next year, when regulators threatened not to certify 2016 models for sale in the U.S., Volkswagen’s senior officials in Wolfsburg, Germany, were told at a July 27 meeting about the deception.

Senior VW managers approved a plan in August 2015 for what the automaker’s employees would say in an upcoming meeting with California regulators, prosecutors allege. That plan called for Volkswagen employees to continue concealing the existence of the emissions device.

Dozens of Volkswagen officials in Germany have hired U.S. criminal defense lawyers over the past several months as the Justice Department ramped up its investigation, Bloomberg reported last month. U.S. authorities have traveled to Germany to arrange interviews with managers and seek cooperation.

VW has suspended or pushed out about a dozen executives in the aftermath of the scandal including former Chief Executive Officer Martin Winterkorn, who has denied any knowledge of the cheating.

VW has been making strides to wrap up other outstanding lawsuits in the U.S. On Friday, the EPA and California regulators gave their first approval to a plan to fix to some of the cars. A San Francisco judge has approved $14.7 billion settlement that requires the company to fix or buy back about 480,000 of the cars in the U.S. with 2.0-liter engines cars. VW is awaiting approval on a $1 billion deal concerning 3.0-liter engines.

Galamsey on top of agenda for Lands Minister nominee