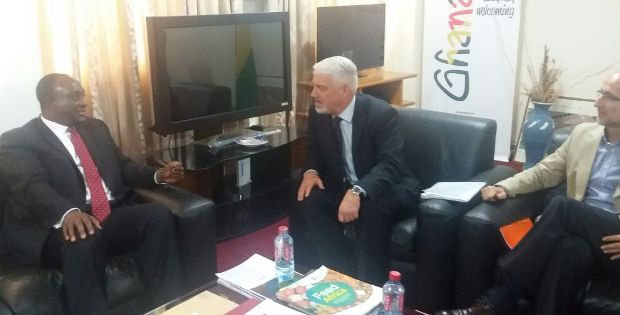 The European Union has pledged its commitment to support government’s plan of developing Ghana’s industrial base to foster economic growth.

According to the EU, the various policies outlined by the government ties in with the union’s target of providing employment for the majority of persons living in the respective countries of operation.

The EU’s commitment also comes on the back of a mid-term review of the union’s cooperation with Ghana.

“We are actually at this stage undertaking a mid-term review of our cooperation and to see if it reflects the priority that the government has and the main message that I am getting from my authorities is to focus on job creation,” EU Ambassador to Ghana, William Hanna said.

Mr. Hanna was speaking to Citi Business News when he paid a courtesy call on the Trade and Industry Minister, Alan Kyerematen, on Friday.

The NPP government has launched an ambitious plan to grow industries and propel its economic growth targets.

Key among the initiatives is the one factory per district policy indicated in the party’s 2016 manifesto.

Also, the government seeks to partner with the private sector to deepen the relationship between the two institutions.

Mr. Hanna also asserted that he is highly hopeful of increased investments considering some of the regulatory reforms the new government intends to put in place to support private sector growth.

“We recognize very much the focus on the private sector and investment and I see that going forward using the opportunities of our partnership and looking at the option of regulatory environment to encourage great investments going forward.”

Export trade between the EU and Ghana reached 3,045 million Euros in 2015.

This also represented a 2.2 percent drop compared with 3,112 million Euros in the previous year.

The EU has also played a key role in Ghana’s decision to sign unto the Economic Partnership Agreement (EPA).

The EPA is among other things expected to deepen the export trade relationship between Ghana and the EU.

Banks position themselves for recapitalization