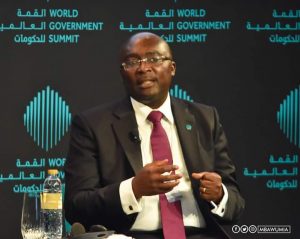 Vice President, Dr Mahamudu Bawumia says the government wants a relationship with the international community driven by trade rather than aid.

According to him, the development will help Ghana position itself in the continent’s growth.

Dr Bawumia made the comment while contributing to a panel discussion on “Leapfrogging Development: The African Story,” at the 5th World Government Summit currently ongoing in Dubai, UAE.

He noted that there was a great potential for Africa’s growth leveraging technology and that opportunity must be tapped urgently to realize the Africa’s growth. He added that, “Africa has to understand that the process of leapfrogging must be homegrown and implemented in full…In the next five years, Africa will become the fastest growing continent.” Other leaders on the panel were the president of Guinea, Alpha Conde, who is also AU Chairman and Mr Ashish Tkakkar, Founder of Mara Group and Mara Foundation.

Dr Bawumia is among the over 90 top government and business leaders who have gathered in the gulf country for the event.

The 3-day World Government summit which started on Sunday, 12th February will end on Tuesday 14th February with an awards ceremony. The World Government Summit is a global platform dedicated to shaping the future of governments worldwide.

The annual summit sets an agenda with a focus on harnessing innovation and technology to solve universal challenges.

It functions as a thought leadership platform and networking hub for policymakers, experts, and pioneers in human development.