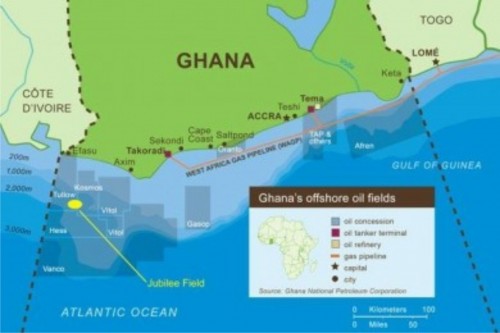 The public hearing in the dispute concerning delimitation of the maritime boundary between Ghana and Côte d’Ivoire in the Atlantic Ocean (Ghana/Côte d’Ivoire) opened today Monday, 6th February 2017.

On 27 February 2015, Côte d’Ivoire submitted a request for the prescription of provisional measures under article 290, paragraph 1, of the United Nations Convention on the Law of the Sea, requesting the Chamber to order that Ghana shall, inter alia, “take all steps to suspend all oil exploration and exploitation operations under way in the disputed area”.

The Special Chamber delivered its Order on the Request on 25 April 2015, in which, inter alia, it considered appropriate to “order Ghana to take all the necessary steps to ensure that no new drilling either by Ghana or under its control takes place in the disputed area”.

The Chamber will hear the merits of the case during the upcoming oral proceedings.

These have been preceded by the filing by both Parties of their written pleadings within the time-limits fixed by Orders of the President of the Chamber.

The dispute was submitted by way of special agreement between the two States concerned to a special chamber of the Tribunal, formed in application of article 15, paragraph 2, of the Statute by Order of the Tribunal dated 12 January 2015.

President of the Special Chamber constituted to deal with the dispute, will preside over the hearing.

Ghana went to the ITLOS in September 2014, under the United Nations Convention on the Law of the Sea (UNCLOS), seeking a declaration that it has not encroached on Cote d’Ivoire’s territorial waters.