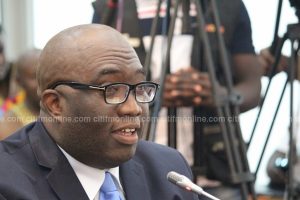 The Minister Designate for Railway Development Mr. Joe Ghartey has announced that some investors have already shown interest in investing in Ghana’s railway industry.

According to him, government intends to revive the industry by partnering with the private sector to lead the railway expansion to cover substantial portions of the country.

Speaking at the Appointments Committee of Parliament, Mr. Ghartey maintained that Ghana’s economic development will accelerate if a reliable railway industry is established.

“There are people who are willing to come and do the slippers in Ghana. The slippers are what they put between the tracks to keep it stable,” he said.

He stated that due to the government’s pro business policies, investors have shown an interest to partner government.

He cited for example that some investors have hinted that , they may want to fabricate some parts of railway lines here in Ghana to export to Nigeria.

“There is a group that has approached us who want to do the wagons in Ghana and export it to Nigeria. We have to try and get the wagons done in Ghana. If they can do it. They want to do it in a location in my constituency, if they can do it, it will make me a very happy person quite apart from the fact that it is in my sector,” he said.

Assuring the members of the committee on moves taken by government to whip up interest of investors, Mr. Ghartey stated that government will create a favorable business environment for the investors to operate.

He stated that the expansion of the sector will attract more investors into the country, since railway development is linked to economic development.

“So we are looking at all that complementary industries that have developed as a result of the rail. All developed countries do that. In Japan they have create  the rail and then they build cities around the rail”.

Answering a question how the government will expand the infrastructure from Accra to Paga in the Upper East region, Mr. Ghartey disclosed that  works have begun to raise the 5  billion cedis required to expand railway infrastructure.