SocGen beats with fourth-quarter earnings and raises dividend; profits up 15% in 2016 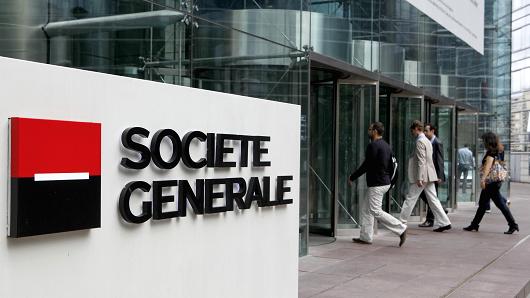 Share on FacebookShare on TwitterShare on Whatsapp
Societe Generale‘s fourth-quarter net profit fell by around two-fifths due to the negative impact of higher taxes and a unit sale, France’s third largest bank by assets announced on Thursday.

However, the net profit figure of 390 million euros ($417 million) still came in ahead of analyst expectations of 354 million euros in a Reuters poll. Revenue also edged up by 1 percent to hit 6.13 billion euros. Shares rose 2.6 percent in early deals on Thursday.

The multinational bank, which provides a full array of investment and retail banking services, had taken a 235 million euro loss related to the sale of its fully-owned Croatian subsidiary OTP Bank during the reporting period.

On a brighter note, both its global banking and retail bank revealed a significant activity boost in the fourth quarter versus year ago. The former division, which includes investment banking, security services and asset management, saw net profit push 51 percent higher to 436 million euros while the latter business saw net profit lift by a quarter despite the ongoing strain of low interest rates.

Chief Executive Officer (CEO) Frédéric Oudéa told CNBC in Paris Thursday that he viewed the performance as very strong and noted the past quarter was the best for operating income in the past decade. He also struck a bullish tone on the company’s outlook.

“I’m confident that at the end of this year there will be even more clarity politically, more clarity on the regulation side and I think that banks like Societe Generale will have delivered further resilient profitable businesses … It’s just a question of patience,” he affirmed.

The CEO said the bank’s new strategic plan, due for delivery before year-end, will have goals and actions for further boosting profitability.

“Investors are expecting from banks like us – European banks – a 10 percent return,” Oudéa estimated, when asked where the lender was aiming with regards to the all-important and closely watched return-on-equity figure.

Turning to the backdrop within France itself, as it gears up for the presidential election in May, Oudéa said he is seeing confidence when he meets with other business leaders within the country. According to the CEO, they want to invest and there is strong momentum despite current political uncertainty which partly stems from the anti-European Union (EU) agenda of the right-wing National Front party leader, Marine Le Pen, one of the frontrunning candidates.

“We are just three months before the election so we will clearly know and quickly know the outcome. I take comfort again that the majority of French people are in favor of staying in the euro. That’s very clear in the polls and I remain optimistic about the outcome that they will not have a major change in the overall environment,” he explained.

“The French will look at all the issues and programs, and French people I think remain committed to Europe,” Oudéa added, reiterating his confidence that his countrymen will opt to stay within the trading bloc.